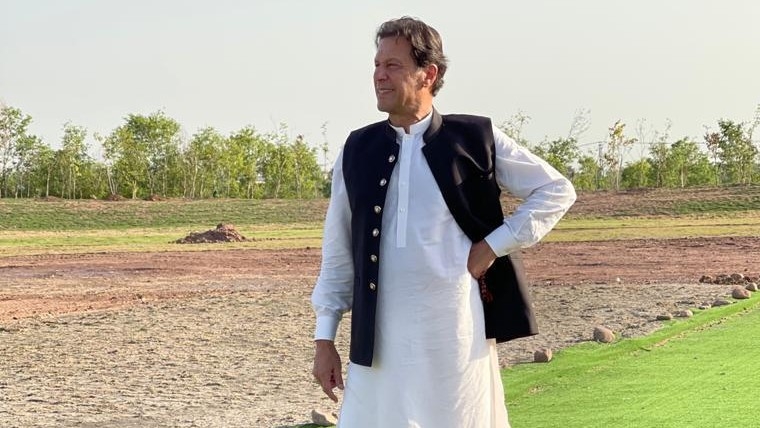 Pakistan Prime Minister Imran Khan on Wednesday directed the police to nab the culprits involved in molesting a female YouTuber on the country's Independence Day at the historic Minar-i-Pakistan. He also directed the officials to arrest those responsible for vandalising Maharaja Ranjit Singh's statue at Lahore Fort.

Taking to Twitter, Sayed Bukhari who is the Special Assistant to Prime Minister Imran Khan, wrote: "PM @ImranKhanPTI personally spoke to IGPunjab, police is catching all culprits involved in manhandling of female tiktoker in Lahore & those damaging statue of Ranjit Singh at LahoreFort." "These are gross violations of laws & social norms, govt won’t spare a single person involved," he added.

Lahore police have booked 400 people who harassed and molested a YouTuber girl on Pakistan's Independence Day at the historic Minar-i-Pakistan, officials said.

The police got into action following the videos of her harassment and molestation that went viral on social media with calls to Prime Minister Imran Khan and Punjab Chief Minister Usman Buzdar to take action against the culprits.

The incident took place on August 14 when hundreds of youngsters were celebrating Independence Day at Azadi Chowk near Minar-i-Pakistan in Lahore.

In the videos, hundreds of young men can be seen throwing the girl in the air for fun, dragging her, tearing her clothes and molesting her. They also took off her shalwar (trouser) and molested her.

"After the videos went viral on Tuesday, the police approached the girl on the order of the high-ups and persuaded her to register FIR," a senior police official told PTI. He said the girl was still traumatised and broke into tears while narrating what had happened to her on Independence Day.

She said in the FIR that she and six other members of her YouTube channel visited Azadi Chowk to record a video clip of the Independence Day celebrations.

"We were shooting the clip when a good number of youngsters started teasing me. They were joined by more and more. Seeing the suspects harassing me, the security guard of the Minar-i-Pakistan Park opened the central gate to let her enter to take shelter. When I crossed the gate and entered the park, the suspects came after me. They tore my clothes and molested me. They dragged and tossed me up in the air for fun. They also beat my team members, and used abusive language," she said and added the humiliation continued for an hour before some people (of them) finally managed to rescue her.

She alleged that during this shameful incident her cell phone, a gold ring and cash worth PKR 150,000 were snatched as well.

The police officer said with the help of video footage the suspects will be arrested soon.

There were reports on social media that the girl was carrying two flags -- a Pakistani and an Indian -- to use them for her TikTok video clip in connection with the Independence Day of both countries. Someone from the crowd raised an objection to this and afterwards this incident took place. The police, however, did not confirm this social media report.

A nine-feet tall cold bronze statue of the first Sikh ruler Maharaja Ranjit Singh was on Tuesday vandalised by an activist of the banned Tehreek-e-Labbaik Pakistan (TLP) at the Lahore Fort in Pakistan's Punjab province.

As per the video that went viral, the accused could be seen chanting slogans, breaking the arm of the statue and dismantling Singh's bust from the horse and throwing it on ground before being pulled by another man.

The TLP activist, meanwhile, has been arrested by the Punjab police, the Express Tribune newspaper reported.

The Lahore Fort's administration said that strict action would be taken against the accused.

Reacting to the incident, Information Minister Fawad Chaudhary in a tweet said that such "illiterates are really dangerous" for Pakistan's image internationally.

Meanwhile, India slammed Pakistan following the vandalisation of a statue, saying Islamabad has completely failed in its duty to prevent such attacks which are creating a "climate of fear" among the minority communities.

External Affairs Ministry Spokesperson Arindam Bagchi said incidents of violence against minority communities, including attacks on their places of worship, their cultural heritage, as well as their private property, are increasing at an "alarming rate" in Pakistan.

"We have seen disturbing reports in the media about the vandalisation of the statue of Maharaja Ranjit Singh in Lahore today. This is the third such incident wherein the statue has been vandalised, since it was unveiled in 2019," he said.

Bagchi was responding to media queries regarding the vandalisation of the statue.