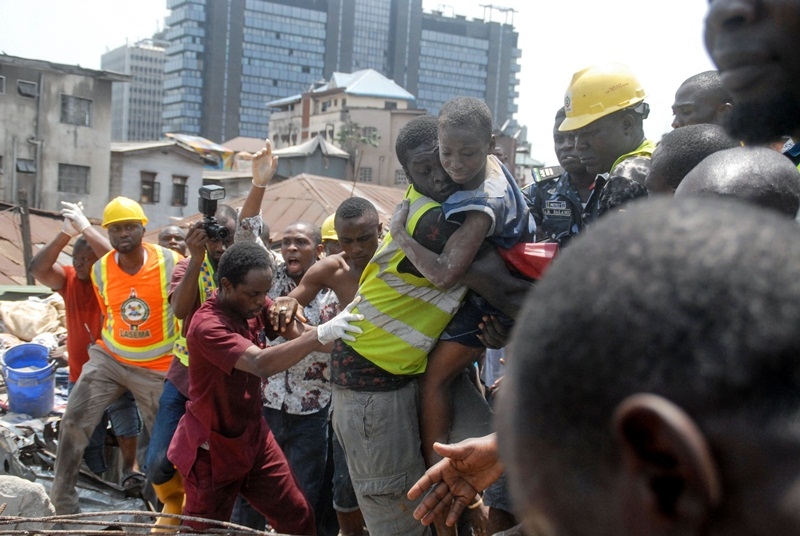 TOPSHOT - Emergency personnel rescue a child at the site of a building which collapsed in Lagos on March 13, 2019. - At least 10 children were among scores of people missing on March 13, 2019 after a four-storey building collapsed in Lagos, with rescuers trying to reach them through the roof of the damaged structure. The children were attending a nursery and primary school on the top floor of the residential building when the structure collapsed. Police said they believed scores of people were trapped under the rubble. (Photo by SEGUN OGUNFEYITIMI / AFP) |

Lagos: At least 12 people were confirmed dead on Thursday following the collapse of a three-storey building which housed a primary school in the Nigerian city of Lagos, the media reported. “Some of the victims were brought in dead,” a doctor told Xinhua news agency at the Massey Children Hospital in Ita-Faji area of the Lagos Island, where some victims were being treated.

The doctor, who wished to remain anonymous, said a pregnant woman and the proprietress of the Ohen Nursery and Primary School were also confirmed dead. “Some of the victims, including the pregnant woman, died after receiving treatment,” he said. The state emergency management agency said scores of people were still trapped underneath the rubble, with no fewer than 20 school children among them. The cause of the collapse was yet to be determined.

While officials said the list of casualties were still being compiled and rescue operations still ongoing, several reports said that up to nine people died a few hours after the building collapsed on Wednesday. It housed a school, shops and apartments. The school had up to 172 registered pupils and rescuers said 50 people had been rescued alive as of Wednesday night, according to officials.

Lagos Island General Hospital, where most of the rescued victims were sent for treatment, said 41 people in “stable condition”. Lagos Governor Akinwunmi Ambode said a thorough investigation will be launched into the incident.