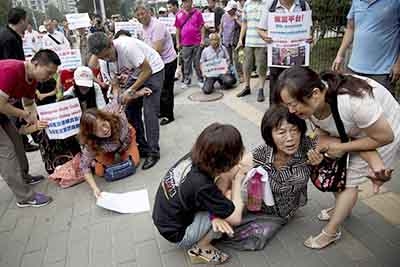 Beijing :Relatives of passengers aboard the missing Malaysia Airlines Flight 370 kneel down and cry in front of the media during a protest near the Malaysian embassy in Beijing Friday, Aug. 7, 2015. Families aching for closure after their relatives disappeared aboard the flight vented deep frustration at differing statements from Malaysia and France over whether the finding of a plane part had been confirmed. AP/PTI(AP8_7_2015_000186B) |

Beijing : Relatives of 153 Chinese passengers aboard missing flight MH370 held a demonstration before the Malaysian Embassy here for the second day, accusing the Malaysian government of trying to close the case by claiming that wreckage found on a French Indian Ocean island was from the plane.

Chinese Police closed the road where the Malaysian and Indian Embassies are located as groups of relatives were allowed to do a sit in protest near the Malaysian mission, expressing their resentment over the Malaysian government’s “eagerness to close the case” even though the fate of the 239 passengers is not known.

It is very rare for Chinese government, which prohibits public protests to permit the relatives to

continue to hold the demonstrations.

The relatives demanded Malaysian Airlines to fly them to Reunion Island in France, where a wing part, which Malaysia’s Prime Minister Najib Razak said came from the Boeing 777 aircraft, was washed ashore.  Zhang Jianyi, a 59-year-old Anhui native whose daughter and son-in-law and grandson were on the flight, said he would not believe the finding because many other parts, such as chairs and life jackets, could have been more easily found than the wing part.

“There will be lots of debris. But so far only a single piece of wreckage has been found,” he said.

“If local cleaners can make a discovery, so can we. I believe we should be given a part to play if there has been a breakthrough with the discovery,” Zhang told the official media.

“We don’t care about the flight wreckage, we want the people on the flight,” said Zhang Yongli, a 64-year-old Beijing native, whose daughter was onboard the flight.