Merkel said that Germany remains committed to reviving the international nuclear agreement with Iran - a step Israel opposes. She also said that Germany believes that a two-state solution remains the best way to end Israel's decades-long conflict with the Palestinians
Associated Press Jerusalem: Germany's lame-duck chancellor, Angela Merkel, received a warm welcome Sunday as she paid a final official visit to Israel, but differences quickly emerged between the close allies on the key issues of Iran's nuclear program and the establishment of a Palestinian state.

Merkel said that Germany remains committed to reviving the international nuclear agreement with Iran - a step Israel opposes. She also said that Germany believes that a two-state solution remains the best way to end Israel's decades-long conflict with the Palestinians.

"Personally, I think that on this point, even if at this stage it seems almost hopeless, the idea of a two-state solution should not be taken off the table, it should not be buried . and that the Palestinians should be able to live securely in a state," Merkel said at a joint news conference with PM Naftali Bennett. She also said that Israeli settlement construction on occupied territories sought by the Palestinians was unhelpful. Bennett, a former settler leader who opposes the establishment of a Palestinian state, quickly pushed back.

“Based on our experience, the meaning of a Palestinian state means that very likely there will be established a terror state, roughly seven minutes from my house and from almost any point in Israel," he said.

Calling himself a "pragmatic man," he instead said he was prepared to take steps on the ground to improve living conditions for Palestinians in the West Bank and Gaza Strip.

It was one of the few disagreements between the close allies during Merkel's two-day visit, which caps a 16-year term marked by near unwavering support for Israel.

At every stop, she was welcomed as a "true friend" of Israel. She repeatedly professed Germany's commitment to Israel's security and said she was confident that Germany's next government - to be determined in lengthy coalition talks following an inconclusive election last month - would take a similar stance.

"I am optimistic that every German government, including the one that follows mine, will feel committed to Israel's security, and I think any successor who becomes German chancellor will see it that way," she said.

Much of the agenda was expected to focus on Iran's nuclear program. While the two leaders both vowed to prevent Iran from developing a nuclear weapon, they voiced different approaches on how to do that.

Germany was a leading player in the 2015 international nuclear deal with Iran. The deal fell apart after then-President Donald Trump, with Israel's support, withdrew from the agreement in 2018. The Biden administration has been trying to revive that deal - known as the JCPOA - over Israeli objections.

"I never considered the JCPOA to be ideal, but it's better than having no agreement," Merkel said. She said the situation is "very difficult" as Iran continues to enrich uranium. She called on the world powers that negotiated the deal, including Russia and China, to hold discussions. "We are facing critical weeks around this question," she said.

Israel considers Iran its greatest enemy, citing the country's military presence in neighboring Syria and its support for hostile militant groups across the region. It accuses Iran of trying to develop nuclear weapons - a charge Iran denies - and says a nuclear-armed Iran would pose an existential threat to Israel.

"There is no point in trying to appease the Iranians. They interpret conciliation as a weakness," Bennett said, accusing Iran of trying to delay while it moves forward with its weapons efforts. "This is a critical point in time, and Germany's position is particularly important." The talks on Iran were expected to continue throughout the day. Merkel also planned a stop at Israel's national Holocaust memorial, Yad Vashem.

Earlier, Merkel called it a "stroke of good fortune" that after the tragedy of the Holocaust, in which Germany's Nazi leaders oversaw the murder of 6 million European Jews, "it has been possible to reset and to re-establish relations between Germany and Israel to the extent that we have done." Israel was formed in the wake of the Holocaust in 1948 and the two countries only established diplomatic ties in 1965. But over the decades those ties have warmed.

Germany is Israel's largest trading partner in Europe and the German government has provided solid support to Israel during wars and diplomatic crises.

Merkel and the former Israeli prime minister, Benjamin Netanyahu, had a cool relationship due to poor personal chemistry and differences over the Palestinian issue. But these differences have done little to upset the broader partnership.

There were no plans for Merkel to meet Netanyahu, who is now Israel's opposition leader. She also was not scheduled to meet with Palestinian leaders in the Israeli-occupied West Bank.

Merkel was scheduled to visit in August, but the trip was postponed after the crisis in Afghanistan in which the Taliban seized power. She then delayed the visit until after last month's German election. She now remains in office in a caretaker capacity until a new government is formed, a process that could take weeks or even months.

Merkel's Christian Democratic Union had its worst-ever election result in the Sept. 26 vote and the party's leader, Armin Laschet, has indicated his willingness to step aside.

The center-left Social Democrats, the environmentalist Greens and the pro-business Free Democrats held their first round of talks Thursday on forming a possible coalition. If they succeed, the alliance would send Merkel's bloc into opposition. 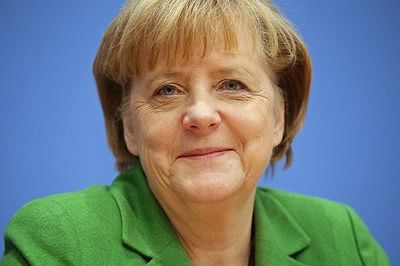