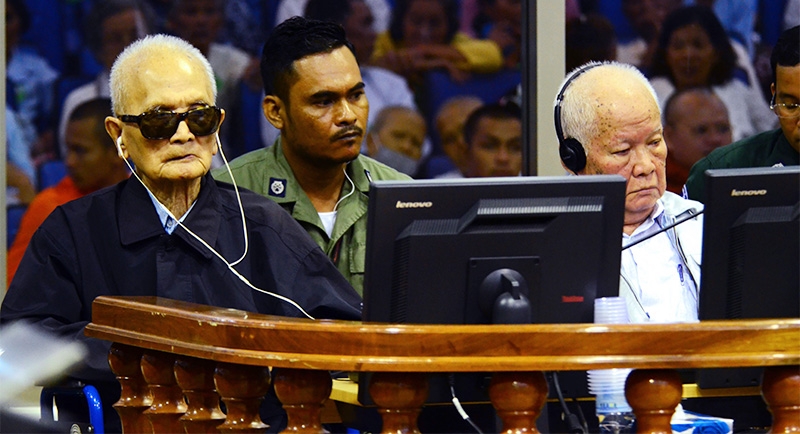 Phnom Penh : Cambodia’s UN-backed court upheld life sentences for two top former Khmer Rouge leaders for crimes against humanity, delivering a blow to their hopes of release as they face a second trial for genocide, reports AFP. “Brother Number Two” Nuon Chea, 90, and ex-head of state Khieu Samphan, 85, were the first top leaders to be jailed in 2014 from a regime responsible for the deaths of up to two million Cambodians from 1975-1979.

They appealed their convictions, accusing the court of a string of errors and the judges of failing to remain impartial due to their personal experiences under the regime. In a lengthy ruling on Wednesday after months of hearings, the bench upheld the bulk of the convictions and the jail terms, but accepted some legal errors had been made in the initial trial. Kong Srim, the Supreme Court Chamber’s top judge, said the pair “had a complete lack of consideration for the ultimate fate of the Cambodian population” adding that the scale of their crimes was “massive”.

“The Supreme Court Chamber considers that the imposition of a life sentence for each of the accused is appropriate,” he added. The Khmer Rouge regime dismantled modern society in Cambodia in their quest for an agrarian Marxist utopia, killing vast numbers and leaving a generational scar. The tribunal, known as the Extraordinary Chambers in the Courts of Cambodia (ECCC), is a complex hybrid court on the outskirts of Phnom Penh combining elements of international and domestic law.

It was set up following an agreement between Cambodia and the United Nations to prosecute senior Khmer Rouge leaders. The number of allegations against Chea and Khieu Samphan — and the complexity of their cases — was so vast that the court split their trials into a series of smaller hearings 2011, fearful the pair might die before justice could be served.