Saeed, a UN designated terrorist whom the US has placed a USD 10 million bounty on, was arrested by the anti-terrorism authorities of the Punjab Province while he was going to Gujranwala from Lahore on Wednesday morning.
PTI 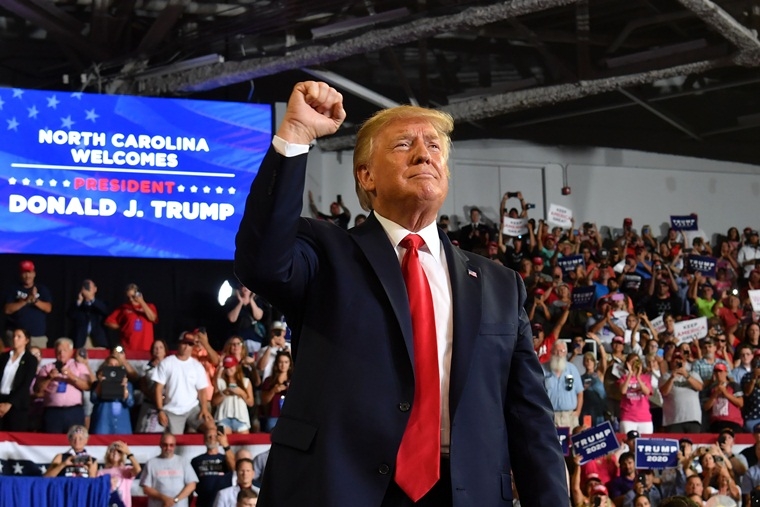 Washington: US President Donald Trump Wednesday said the arrest of 2008 Mumbai terror attacks mastermind and JuD chief Hafiz Saeed by Pakistan was a result of "great pressure" exerted by his administration on Islamabad in the last two years.

Saeed, a UN designated terrorist whom the US has placed a USD 10 million bounty on, was arrested by the anti-terrorism authorities of the Punjab Province while he was going to Gujranwala from Lahore on Wednesday morning. A Counter-Terrorism Department (CTD) team intercepted him near Gujranwala city (some 80-km from Lahore) and arrested him on terror financing charges, a CTD said.

Saeed's arrest comes just days ahead of Pakistan Prime Minister Imran Khan's maiden visit to the US and talks with President Trump who has previously admonished Pakistan for not doing enough to rein in terror groups operating from its soil. "After a ten year search, the so-called "mastermind" of the Mumbai Terror attacks has been arrested in Pakistan. Great pressure has been exerted over the last two years to find him!" said Trump who is scheduled to meet Khan at his Oval Office on Monday, July 22.

However, former Pakistan ambassador to the US Husain Haqqani contested Trump's tweets and said that the official who gave the President such information should be fired. "Finding him was never an issue. He operated freely and was highly visible. He has been arrested and released many times over," he said. "The president should "immediately fire whoever gave him the wrong information," Haqqani said in a tweet with other people also expressing their opinion on the arrest.

"Found?? The man had been leading prayers in the largest cricket stadium of the country for years & riding horses to the national monument in Lahore, Pakistan," tweeted columnist Mohammad Taqi. Saeed has been arrested and released several times, usually just before high level visits by US officials to Pakistan or Pakistani officials to America, Haqqani said. He was also detained soon after the 9/11 and the Mumbai attacks to appease the Americans. He has never been brought to trial and has been allowed to operate freely, including participation in last year's elections, he said.

There is no evidence or reason to believe that things will be different this time around. Pakistan supports and protects anti-India militants as an instrument of policy and has shown no interest in giving it up, Haqqani said. He said Pakistan's generals and politicians from Prime Minister Imran Khan's party have praised Saeed until recently. "Clearly they are trying an old trick on a new US President," Haqqani said. The powerful House Foreign Affairs Committee criticised President Trump for his tweet. The Democratic party-majority in a tweet told Trump that Saeed was living freely and Pakistan was not searching for him for 10 years.

"FYI Pakistan wasn't searching for him for 10 years. He's been living freely, and was arrested and released in: December 2001, May 2002, October 2002, August 2006 (twice), December 2008, September 2009, January 2017. Let's hold .. until he's convicted," tweeted the House Foreign Affairs Committee. Saeed was presented before an Anti-Terrorism Court (ATC) in Gujranwala that sent him on judicial remand for seven days. He was subsequently shifted to Lahore's high-security Kot Lakhpat jail, Pakistani officials said.

Saeed-led Jamaat-ud-Dawah (JuD) is believed to be the front organisation for the Lashkar-e-Taiba (LeT) which is responsible for carrying out the 2008 Mumbai attacks that killed 166 people, including American nationals. He was listed under UN Security Council Resolution 1267 in December 2008. The US Department of the Treasury has designated Saeed as a Specially Designated Global Terrorist, and the US, since 2012, has offered a USD 10 million reward for information that brings the JuD chief to justice.

The CTD on July 3 had registered 23 FIRs against 13 top leaders of the JuD including Saeed on the charges of "terror financing" in different cities of Punjab province. Under pressure from the international community, Pakistani authorities have launched investigations into matters of the LeT, the JuD and its charity wing the Falah-e-Insaniat Foundation (FIF) regarding their holding and use of trusts to raise funds for terrorism financing.

Trump has repeatedly asked Pakistan to abide by its UN Security Council commitments to deny terrorists safe haven and block their access to funds. The Pakistani government had also recently arrested the JuD's second-in-command Abdul Rehman Makki, who is brother-in-law of Saeed, on the charges of making a public speech and terror financing charges. Saeed was keeping a low profile at his Lahore's Jauhar Town residence after the Imran Khan government took control of the JuD and the FIF properties including seminaries and mosques across the country following international pressure built up after the Pulwama attack carried out by the Pakistan-based Jaish-e-Mohammad terror group in which 40 CRPF personnel were killed.