Dissident journalist Raman Pratasevich smokes a cigarette while speaking in a video from a detention center in Minsk, Belarus. The footage of Raman Pratasevich was part of an hour-long TV program aired late Wednesday by the state-controlled ONT channel. In the film, the 26-year-old Pratasevich is also shown saying that protests against Belarus' authoritarian President Alexander Lukashenko are now pointless amid a tough crackdown and suggesting that the opposition wait for a more opportune moment. | The Associated Press
Follow us on

A dissident journalist who was arrested after his plane was diverted to Belarus said in a video from prison that demonstrations against the country's authoritarian leader had fizzled and the opposition should wait for a better moment to revive them. It was Raman Pratasevich's second such appearance that his allies dismissed as being coerced.

In footage broadcast Wednesday night on Belarusian state TV in an hour-long programme, the 26-year-old Pratasevich also said that he had been set up by an unidentified associate.

The presenter of the broadcast on the ONT channel claimed the Belarusian authorities were unaware that Pratasevich was aboard a Ryanair jet flying from Greece to Lithuania when flight controllers diverted it to the Belarusian capital of Minsk on May 23, citing a bomb threat. No bomb was found, but Pratasevich was arrested along with his Russian girlfriend.

Outraged European Union leaders called the diversion an act of air piracy and responded by barring the Belarusian flag carrier Belavia from the bloc's airports and airspace, telling European airlines to skirt Belarus and drafting new bruising sanctions against the country.

President Alexander Lukashenko, who has ruled the ex-Soviet nation of 9.3 million with an iron fist for more than a quarter-century, has accused the West of trying to "strangle" his country with sanctions.

The video of Pratasevich, who left Belarus in 2019 and has become a top foe of Lukashenko, marked his second appearance on state TV. In his first, he spoke in a rapid monotone and said he was confessing to staging mass disturbances. His parents, who live in Poland, said the confession seemed to be coerced and that makeup appeared to be covering up bruising on his face.

In the new video, Pratasevich looked more relaxed and smiled occasionally, but a top associate said Pratasevich again was clearly speaking under duress.

Pratasevich acknowledged the fizzling of the protests, which were fueled by Lukashenko's reelection to a sixth term in an August vote that was widely seen as rigged. They drew up to 200,000 people but died down over winter amid the brutal crackdown by Lukashenko, with more than 35,000 people arrested and thousands beaten.

"Now we need to abandon ... the street activity we had before, those formats in which we worked," Pratasevich said. "Because there is simply no such activity now, and there can't be any now." He said the opposition should wait for an economic downturn to mount a new challenge.

"We need to wait until the economic situation worsens ... and people take to the street for a bowl of soup, to put it bluntly," he said.

Lukashenko has defended the flight diversion as a legitimate response to the bomb threat, and Wednesday's broadcast appeared designed to back the contention that the Belarusian authorities were unaware Pratasevich was aboard.

In the video, Pratasevich described seeing heavily armed special forces waiting as the plane taxied to a parking spot.

"It was a dedicated SWAT unit - uniforms, flak jackets and weapons," he said.

The journalist said he disclosed his travel plans in a chat with associates 40 minutes before his departure. He alleged that the bomb threat could have been issued by someone with whom he had a personal conflict, but didn't elaborate.

Pratasevich alleged that the person - whom he didn't identify - had links with opposition-minded hackers who have attacked official Belarusian websites and issued bomb threats in the past.

"The first thing I thought was that I have been set up," he said. "When the plane was on a landing path, I realized that it's useless to panic." Pratasevich also said that some time before the flight he had a rift with Franak Viachorka, an adviser to Sviatlana Tsikhanouskaya, the main opposition candidate in the August presidential election.

Asked about the video, Viachorka told The Associated Press that Pratasevich now is "a hostage under pressure" and insisted they have friendly ties.

Pratasevich also said in the video that he tried to stay away from his girlfriend after the landing, hoping authorities wouldn't arrest her. Sofia Sapega didn't feature in the new TV program, but she was shown in a video from prison last week, confessing to running a channel that revealed personal data about Belarusian security officers.

Pratasevich ran a widely popular channel on the Telegram messaging app that played a key role in helping organize the anti-government protests and has been charged with inciting mass disturbances - accusations that carry a 15-year prison sentence. 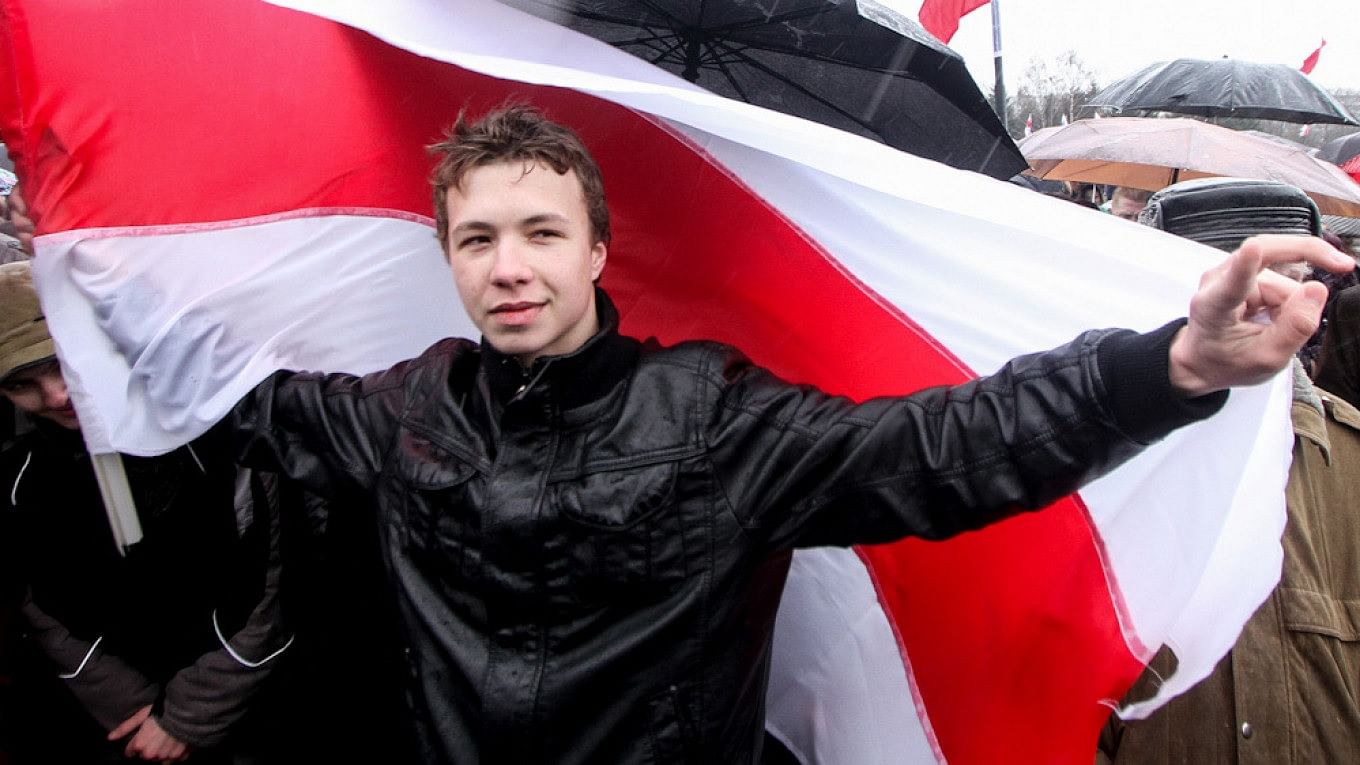