"For the regular Iranian navy, this vessel was very valuable because it gave them reach." The sinking of the Kharg marks the latest naval disaster for Iran. In 2020, during an Iranian military training exercise, a missile mistakenly struck a naval vessel near Jask, killing 19 sailors and wounding 15. Also in 2018, an Iranian navy destroyer sank in the Caspian Sea.
Associated Press 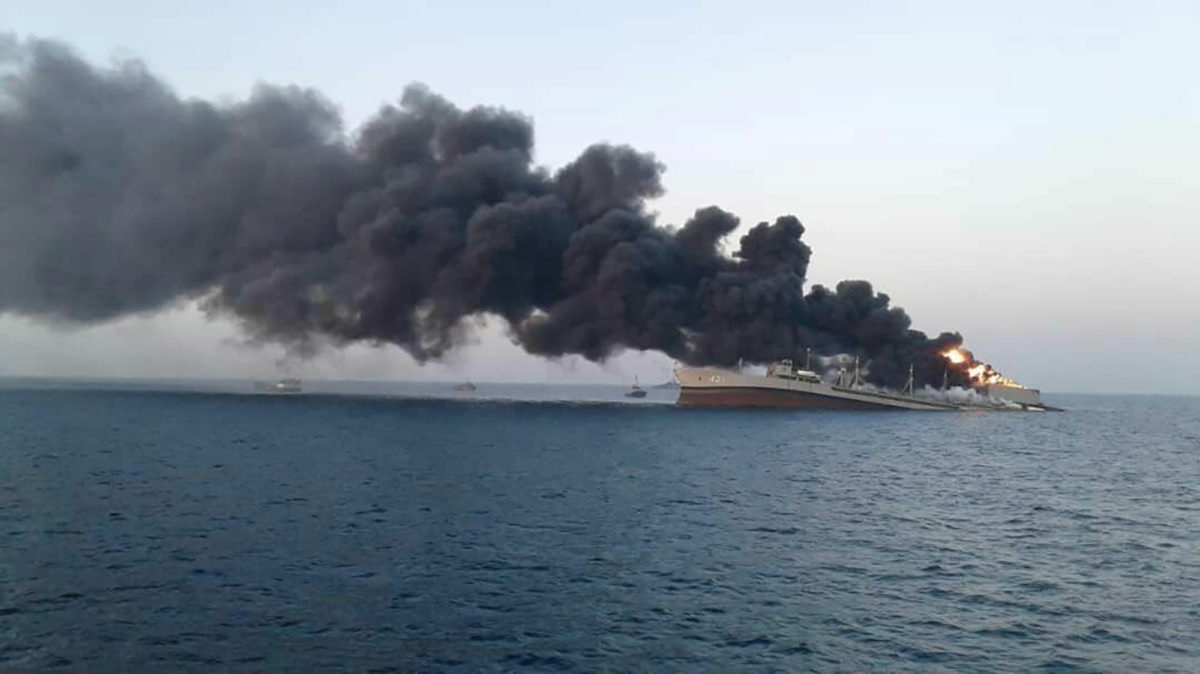 The largest warship in the Iranian navy caught fire and later sank Wednesday in the Gulf of Oman under unclear circumstances, the latest calamity to strike one of the country's vessels in recent years amid tensions with the West.

The blaze began around 2:25 am and firefighters tried to contain it, the Fars news agency reported, but their efforts failed to save the 207-meter (679-foot) Kharg, which was used to resupply other ships in the fleet at sea and conduct training exercises. State media reported 400 sailors and trainee cadets on board fled the vessel, with 33 suffering injuries.

The ship sank near the Iranian port of Jask, some 1,270 kilometers (790 miles) southeast of Tehran on the Gulf of Oman near the Strait of Hormuz - the narrow mouth of the Persian Gulf.

Satellite photos from Planet Labs Inc. analysed by The Associated Press showed the Kharg off Jask with no sign of a fire as late as 11 am Tuesday.

Photos circulated on Iranian social media showed sailors wearing life jackets evacuating the vessel as a fire burned behind them.

Satellites from the US National Oceanic and Atmospheric Administration that track fires from space detected a blaze near Jask that started just before the time of the fire reported by Fars.

Iranian officials offered no cause for the fire aboard the Kharg, though they said an investigation had begun.

It wasn't immediately clear if there were injuries or what caused the blaze at the Tondgooyan Petrochemical Co., though temperatures in the capital reached nearly 40 degrees Celsius (104 degrees Fahrenheit) and hot summer weather in Iran has caused fires in the past.

The fire Wednesday aboard the Kharg warship follows a series of mysterious explosions that began in 2019 targeting commercial ships in the Gulf of Oman.

The US Navy accused Iran of targeting the ships with limpet mines, timed explosives typically attached by divers to a vessel's hull.

Iran denied that, though US Navy footage showed Revolutionary Guard members removing one unexploded limpet mine from a ship. The attacks came amid heightened tensions between the US and Iran after then-President Donald Trump unilaterally withdrew America from Tehran's nuclear deal with world powers. Negotiations on saving the accord continue in Vienna.

In April, an Iranian ship called the MV Saviz believed to be a Guard base and anchored for years in the Red Sea off Yemen was targeted in an attack suspected to have been carried out by Israel.

It escalated a yearslong shadow war in the Mideast between the two countries, ranging from strikes in Syria, assaults on ships and attacks on Iran's nuclear program.

The Israeli prime minister's office did not respond to a request for comment Wednesday regarding the Kharg.

Pentagon press secretary John Kirby said the US was aware of the loss of the ship, but declined to comment further.

State TV and semiofficial news agencies on Wednesday referred to the Kharg, named after the island that serves as the main oil terminal for Iran, as a "training ship." The vessel often hosted cadets from the Imam Khomeini Naval University on the Caspian Sea.

Like much of Iran's major military hardware, the Kharg dated back to before Iran's 1979 Islamic Revolution. The warship, built in Britain and launched in 1977, entered the Iranian navy in 1984 after lengthy negotiations. That aging military equipment has seen fatal accidents as recently as Tuesday, when a malfunction in the ejector seats of an Iranian F-5 dating back to before the revolution killed two pilots while the aircraft was parked in a hangar.

In recent months, the navy converted a slightly larger commercial tanker called the Makran to use it as a mobile launch platform for helicopters. The Kharg also could launch helicopters on a smaller scale.

But the newer vessel likely can't fill the role of the Kharg, which could handle both refueling and replenishing supplies of ships at sea, said Mike Connell of the Center for Naval Analysis, an Arlington, Virginia-based federally funded nonprofit that works for the US government.

The Kharg also was seaworthy enough to sail through the Suez Canal into the Mediterranean Sea and into South Asia in the past and could lift heavy cargo.

"For the regular Iranian navy, this vessel was very valuable because it gave them reach," Connell said. "That allowed them to conduct operations far afield. They do have other logistics vessels, but the Kharg was kind of the most capable and the largest." The sinking of the Kharg marks the latest naval disaster for Iran. In 2020, during an Iranian military training exercise, a missile mistakenly struck a naval vessel near Jask, killing 19 sailors and wounding 15. Also in 2018, an Iranian navy destroyer sank in the Caspian Sea.