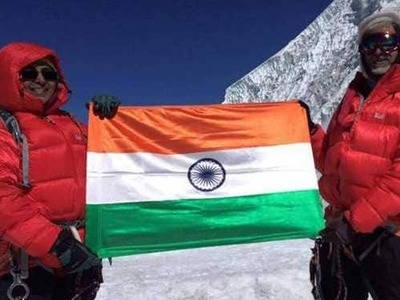 Kathmandu: A 54-year-old Indian woman climber died while descending the Mt Everest, taking the toll of those who perished during this season’s expedition in the Himalayan nation to 13, according to a media report on Thursday.

Mumbai-based Anjali S Kulkarni died at above Camp IV after she fell ill while coming down from the summit point on Wednesday, Thupden Sherpa, an official at Arun Treks, which organised the climb said. Kulkarni is the fifth Indian climber to have died during the expedition to the world’s highest peak with a height of 8,848 metres. Four Indian climbers, including an Indian Army soldier, perished during their trek last week.

The woman, who was accompanied by her husband Sharad Kulkarni, successfully scaled the peak of Mt. Everest on Wednesday morning, Sherpa was quoted as saying by The Himalayan Times. Kulkarni was part of the six-member expedition led by Rabindra Kumar and efforts were underway to recover her body from Camp IV, officials from the Nepal tourism department said.