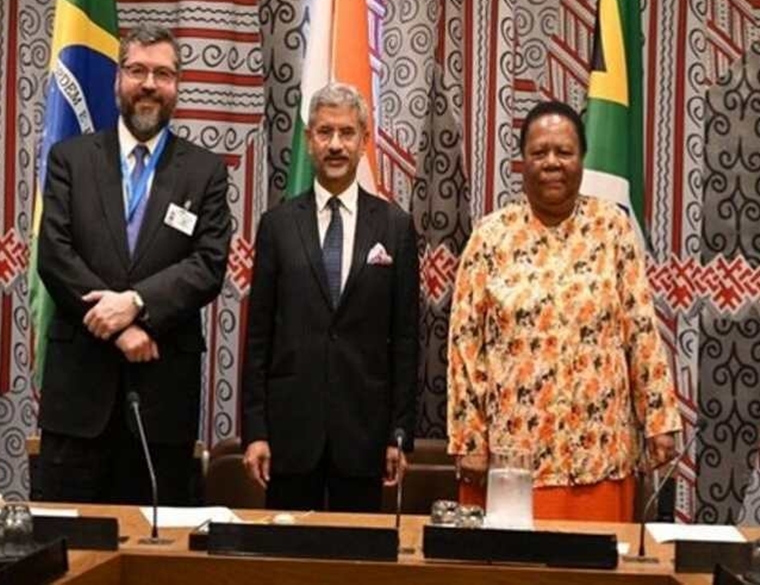 New York [USA]: India, Brazil and South Africa on Thursday pledged to promote the reform of the multilateral system through cooperation in all relevant multilateral fora and international organisations and reiterated their commitment to working together to prosecute persons sought for corruption and economic crimes.

The commitment was made by the IBSA member states -- India, Brazil and South Africa, which was attended by the foreign ministers of the respective countries. "At a time of significant and pressing global challenges, India, Brazil and South Africa acknowledge our common objectives and shared responsibility to help build a peaceful, secure and prosperous world. The right to development and equality of opportunities are critical means to achieve such goals," a statement issued by the Ministry of External Affairs (MEA) said.

It noted that there is a need for the reformation of the multilateral system, so as to ensure that it works effectively for all states and its peoples. "As large democracies and vibrant nations, we believe that people should be placed at the centre of inclusive international governance. We are committed to reforming the multilateral system in order to meet the needs and expectations of our peoples, as well as to respond to increasing global challenges," the statement said.

"We reaffirm our commitment to enhance the voice and representation of emerging and developing economies, especially those in Africa, in the decision-making bodies of multilateral institutions," it added. The member countries also said they remain committed to working together for the expansion of membership in both the permanent and non-permanent categories in the UN Security Council, stressing that it remains a crucial international undertaking.

"The comprehensive reform of the United Nations (UN) system, including that of the UN Security Council, remains a crucial international undertaking. As we welcome, inter-alia, the cooperation between the United Nations and IBSA countries, as well as with regional organisations and institutions, such as the African Union Peace and Security Council (AUPSC), in the promotion of international peace and security, we remain committed to working together for the expansion of membership in both the permanent and non-permanent categories for achieving a more representative, inclusive and equitable UN Security Council," the statement outlined.

It also said that IBSA member states remained concerned with the slow pace of inter-governmental negotiations on UN Security Council reform, which have not produced tangible progress in the United Nations General Assembly (UNGA). "With the onset of the 75th anniversary of the UN in 2020, we urge redoubling of efforts to achieve progress on this issue, with a view to an early comprehensive reform of the Security Council," the statement said.

"The process of WTO reform must keep development at its core, promote inclusiveness and non-discrimination, build trust and address the inequalities and asymmetries in existing agreements. It should take into account the diversity of interests and concerns of the whole Membership, including developing Members, in particular, LDCs. IBSA countries recognise the central role played by the WTO in promoting the interests of developing countries on issues such as agriculture," it stressed.

The statement noted that strengthening the global financial safety net, with a strong, quota-based, and adequately resourced International Monetary Fund (IMF) at its centre, is essential. The member nations reiterated their commitment to working together on strengthening cooperation to prosecute persons sought for corruption and other economic crimes, including through international organisations and institutions such as the G20, the Financial Action Task Force (FATF) and others.

"We underscore the need for continuing consultations and exchange of views between the IBSA countries in order to build partnerships in multilateral fora," the statement said. "We commit ourselves to promoting the reform of the multilateral system through cooperation and coordination in all relevant multilateral fora and international organizations including the WTO and groupings of G20, BRICS, BASIC, and G-77," it further noted.