Hurricane Dorian heads to Florida after strike in Caribbean 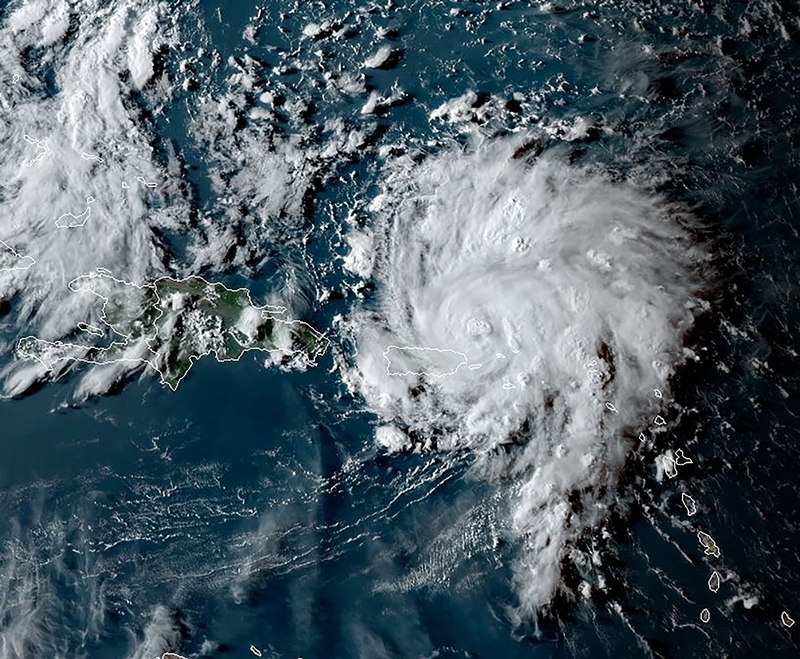 Miami: Hurricane Dorian posed an increasing menace to Florida as it pushed over open waters Thursday after leaving limited damage in Puerto Rico and the Virgin Islands.

The US National Hurricane Center said Dorian was expected to grow into a potentially devastating Category 3 hurricane before hitting the US mainland late Sunday or early Monday somewhere between the Florida Keys and southern Georgia.

Across much of Florida's east coast, residents began flocking to the grocery stores and gas stations, stocking up in anticipation of the storm. There were lines at many gas stations in South Florida as people began filling gas cans and topping off their gas tanks.

Josefine Larrauri, a retired translator, went to a Publix supermarket in Miami only to find empty shelves in the water section and store employees were unsure of when new cases would arrive.

Larrauri fled to Orlando two years ago when Hurricane Irma was expected to hit South Florida as a Category 5 storm and ended up shifting west to land on the Lower Keys and then Marco Island.

This time, Larrauri said the uncertainty made her nervous. "I feel helpless because the whole coast is threatened," she said. "What's the use of going all the way to Georgia if it can land there?"

Florida Gov. Ron DeSantis declared a state of emergency for the state's eastern and central counties Wednesday and planned to visit the National Hurricane Center in Miami on Thursday morning.

County governments along the state's central east coast distributed sandbags and many residents rushed to warehouse retailers to load up on water, canned food and emergency supplies.

"Hurricane Dorian looks like it will be hitting Florida late Sunday night," President Donald Trump tweeted Thursday morning. "Be prepared and please follow State and Federal instructions, it will be a very big Hurricane, perhaps one of the biggest!"

At the Cape Canaveral Air Force Station, next door to NASA's Kennedy Space Center, workers prepared and stood ready to support the many private rocket companies on site.

"The question is how bad is it going to be," 45th Space Wing spokesman Jim Williams said Thursday.

Managers at Kennedy, meanwhile, kept close watch on the storm's track while debating whether to move the mobile launch platform off the pad and into the safety of the massive Vehicle Assembly Building, built to withstand 125 mph (200 kph) gusts.

The mobile launcher is being tested at the pad for the first launch of NASA's mega rocket, the Space Launch System or SLS, set to fly in the next year or two.

Dorian blew through the Virgin Islands as a Category 1 hurricane Wednesday while raking nearby Puerto Rico with high winds and rains.

The storm caused an islandwide blackout in St. Thomas and St. John in the US Virgin Islands, and scattered power outages in St. Croix, government spokesman Richard Motta said.

The storm also downed trees and at least one electric pole in St. Thomas, he said.

And there were no reports of serious damage in the British Virgin Islands, where Gov. Augustus Jaspert said crews were already clearing roads and inspecting infrastructure by late Wednesday afternoon.