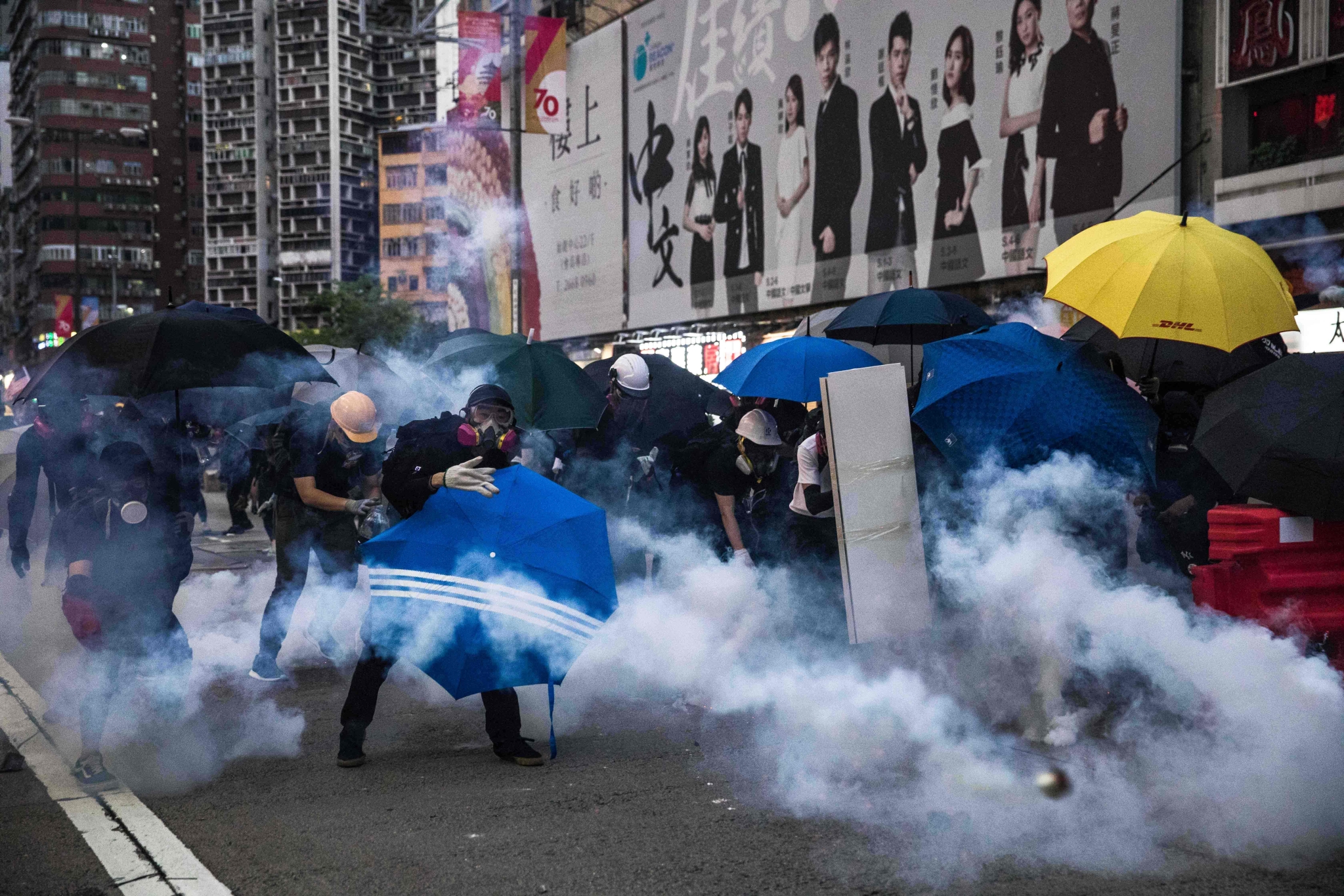 But tens of thousands joined the unsanctioned rally regardless, showing the movement can still keep pressure on the city's pro-Beijing leaders after nearly five months of protests and political unrest.

In a familiar pattern, the huge rally began peacefully. But it soon descended into chaos as smaller groups of hardcore protesters hurled petrol bombs at police, subway entrances and at Chinese mainland bank branches as well as vandalising multiple shops.

Police responded with repeated volleys of tear gas, rubber bullets and baton charges. Throughout the afternoon a water cannon truck chased protesters down Nathan Road, one of the city's busiest shopping thoroughfares, leaving it streaked with blue dye from the vehicle's turrets.

The dye, used to identify protesters, also contains a painful pepper solution. As the protesters fled the streets, frontliners stayed behind to slow the advance of riot police, setting fire to makeshift barricades.

Tensions were running high after the leader of the group organising the weekend rally, Jimmy Sham, was hospitalised by men wielding hammers earlier in the week.

Then on Saturday night a man handing out pro-democracy flyers was stabbed in the neck and stomach, reportedly by an assailant who later shouted pro-Beijing slogans.

Many on Sunday's march said they wanted to show they were unbowed by the attacks and authorities increasingly banning public gatherings. "The more they suppress, the more we resist," a 69-year-old protester, who gave her surname as Yeung, told AFP.

"Can police arrest us all, tens of thousands of people?" Philip Tsoi, a self-described frontline protester, said they needed to keep getting numbers out even though many more hardcore activists like him had been "arrested or wounded" in recent weeks.

"What I want is a truly democratic government whose leader is elected by Hong Kong people instead of selected by a Communist regime," he told AFP. Vigilante violence has mounted on both sides of the ideological divide.

In recent weeks pro-democracy supporters have badly beaten people who vocally disagree with them -- although those fights tend to be spontaneous outbursts of mob anger during protests.

In contrast, pro-democracy figures have been attacked in a noticeably more targeted way, with at least eight prominent government critics, including politicians, beaten by unknown assailants since mid-August.

Protesters have labelled the attacks "white terror" and accused the city's shadowy organised crime groups of forming an alliance with Beijing supporters.

Beijing has denounced the protests as a foreign-backed plot and condemned attacks on those voicing support for China. But it has remained largely silent on the attacks carried out against pro-democracy figures.

Hong Kong has now been battered by 20 weeks of protests and with no political solution in sight, clashes have intensified each month. Hardliners have embraced widespread vandalism, while riot police have responded with increasing volleys of tear gas, rubber bullets and, more recently, live rounds.

The rallies were triggered by a now-abandoned plan to allow extraditions to the authoritarian mainland. But they morphed into wider calls for democracy and police accountability after Beijing and local leaders took a hard line.

Protesters are demanding an independent inquiry into the police, an amnesty for those arrested and fully free elections, all of which have been rejected by Beijing and Hong Kong's unelected leader Carrie Lam.

Earlier this month city leader Lam invoked a colonial-era emergency law to ban face masks. The decision set off a new wave of protests and vandalism that shut down much of the city's transport network.

In the last fortnight, the clashes have become less intense with the city's subway closing each night at 10:00 pm. But protests have continued with many defying the mask ban during "flashmob" rallies.