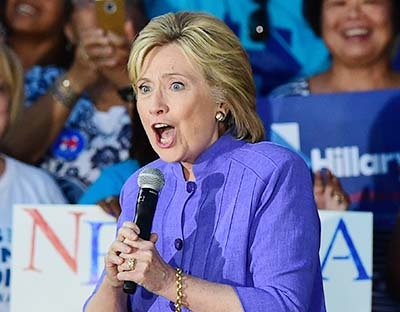 Washington : After an impressive performance during the Democratic primary debate, Hillary Clinton’s presidential ambition has gained momentum, with her campaign having raised a whopping $ 33 million in cash — more than any other candidate in the fray.

In a historic third quarter, Clinton raised more than $28 million in primary dollars and now has received more than 600,000 contributions from nearly 400,000 individual donors to the campaign to date.

This was the largest off-year third quarter ever for a non-incumbent.

“These numbers are a testament to broad support for Hillary Clinton’s vision for America and her plans to create rising incomes and middle class growth,” said Robby Mook, campaign manager for the Hillary For America (HFA).

“We are on track to hit our goal of USD 100 million during the primary, which will set us up to reach more voters, organise them, and make Hillary Clinton the Democratic nominee in 2016,” he said.

In addition, the Hillary Victory Fund (HVF) raised more than USD 3 million this quarter, with 62 percent of its contributions coming from women.

After a $ 600,000 transfer to the Democratic National Committee to help strengthen the national party and help the Democratic nominee win the White House, the HVF has more than $ 1.7 million on hand.

On the Republican side, Jeb Bush raised $13.4 million and Ben Carson $ 20 million haul in the third quarter.