The opinion polls give the sitting president the edge in the second round run-off, but Le Pen's far right party has never been this close to power which is why the stakes are so high

A torn front page ad shows incubent President Emmanuel Macron and challenger Marine Le Pen as the environmental group Extinction Rebellion takes part in a three-day demonstration against what they call France's inaction on climate issues, in the district of Porte de Saint Denis in the center of Paris, France, on Monday, April 18, 2022 | AP

President Emmanuel Macron is in the pole position to win reelection Sunday in France’s presidential runoff, yet his lead over far-right rival Marine Le Pen depends on one major uncertainty: voters who decide to stay home.

A victory in Sunday’s runoff vote would make Macron the first French president in 20 years to win a second term.

All opinion polls in recent days converge toward a victory for the 44-year-old pro-European centrist — yet the margin over his nationalist rival appears uncertain, varying from 6 to 15 percentage points, depending on the poll.

Polls also forecast a possibly record-high number of people who either vote blank or stay at home and don’t vote at all in this second and final round.

The April 10 first-round vote eliminated 10 other presidential candidates. Who becomes France’s next leader will largely depend on what people who backed those losing candidates do on Sunday.

The question is a hard one, especially for leftist voters who dislike Macron but don’t want to see Le Pen in power either. A second term for Macron relies in part on their mobilization, prompting the French leader to issue multiple appeals to leftist voters in recent days.

The two candidates fighting for the French presidency have launched bitter attacks on each other in a final bid to win over millions of undecided voters before Sunday's election.

Centrist Emmanuel Macron is aiming to become the first sitting president to win a second term for 20 years.

He said Marine Le Pen's far right was fuelled by unhappiness and risked a society of hate and fracture.

It was proof of his weakness, she said, that he used old insults of extremism.

The opinion polls give the sitting president the edge in the second round run-off, but Le Pen's far right party has never been this close to power which is why the stakes are so high.

Hours before a media blackout was due to begin at midnight, the incumbent and his far-right challenger made their final pitches to undecided voters in radio interviews and on walkabouts, with Le Pen saying Macron’s polling lead would be proved misleading.

“Polls aren’t what decide an election,” the Rassemblement National (National Rally) leader said in Étaples in her northern stronghold, attacking the current president’s “condescension and arrogance” and insisting her policies held up under scrutiny.

“I call on people to form their own opinion, read what I actually propose,” she said, adding that Macron “calls millions of French voters ‘far right’; for him it’s an insult. I’ve never expressed even the slightest hostility to his voters.” In a radio interview she went further, saying Macron “does not like the French”.

Again slamming her centrist rival’s unpopular plan to extend the retirement age to 65, saying it amounted to “a life sentence”, Le Pen said the choice facing French voters on Sunday was “fundamental. It is in the hands of the French people. It is Macron, or France.”

For his part, Macron accused Le Pen of trying to divide France and stigmatise Muslims with her proposal to outlaw the hijab in public. “The far right lives off fear and anger to create resentment,” he said. “It says excluding parts of society is the answer.”

Much of Le Pen’s programme, including her plan to give French nationals priority on jobs and benefits, “abandons the founding texts of Europe that protect individuals, human rights and freedoms”, the president said on French radio. Her proposals would exclude non- and dual-nationals from many public sector jobs and restrict their access to welfare, also cancelling automatic citizenship rights for children of non-nationals born in France and making naturalisation harder.

He also dismissed his challenger’s plans to tackle the cost of living crisis, the main focus of her campaign, saying she “gives the impression she has an answer, but her answers aren’t viable” – although he conceded Le Pen had “managed to draw on some of the things I did not manage to do to pacify some of people’s anger”.

The cost of living has emerged as the election’s main campaign issue, with a sustained squeeze leaving many voters saying they have difficulty making ends meet despite support during the pandemic, caps on rising fuel prices, and data suggesting that all but the poorest 5% of French households are better off than five years ago.

Polls published on Thursday and Friday after Wednesday’s fractious live TV debate showed Macron’s score stable or rising at between 55.5% and 57.5% and Le Pen’s between 42.5% and 44.5% – a lead for the incumbent of between 10 and 14 points, but a far closer race than the 66%-34% score when the same two contestants met in the previous 2017 election.

The French presidential election is also being closely watched abroad.

In an opinion piece Thursday in several European newspapers, the center-left leaders of Germany, Spain and Portugal urged French voters to choose him over his nationalist rival. They raised a warning about “populists and the extreme right” who hold Putin “as an ideological and political model, replicating his chauvinist ideas.”

A Le Pen victory would be a “traumatic moment, not only for France, but for European Union and for international relationships, especially with the USA,” Lazar said, noting that Le Pen “wants a distant relationship between France and the USA.”

In any case, Sunday’s winner will soon face another obstacle to be able to govern France: A legislative election in June will decide who controls a majority of seats in France’s National Assembly.

Already, the battles promise to be hard-fought. 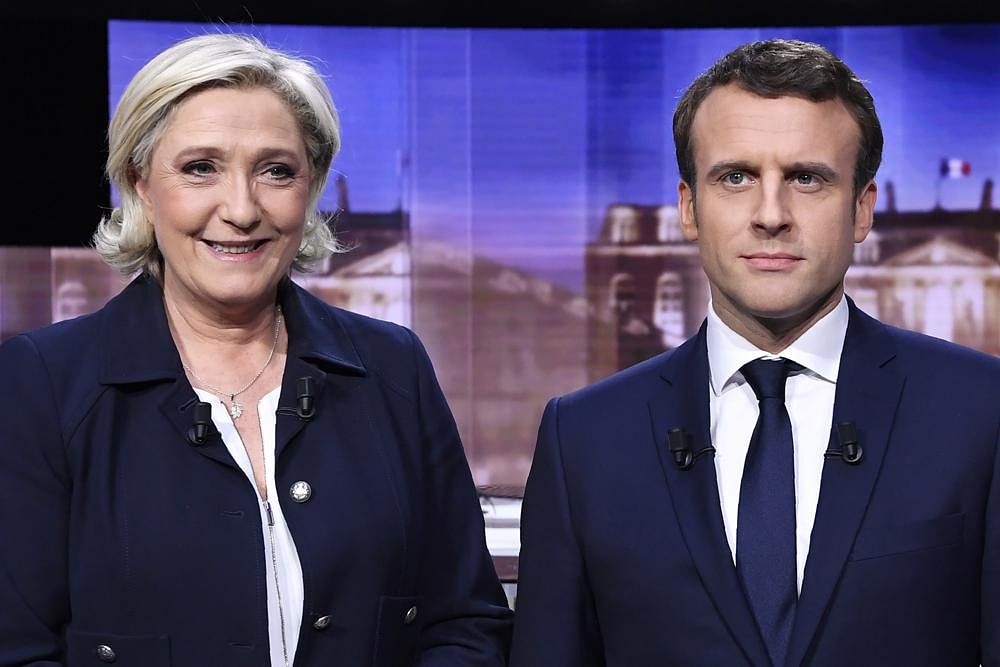