Police officers, firefighters and rescue workers are seen at the site of an attack on the Promenade des Anglais on July 15, 2016, after a truck drove into a crowd watching a fireworks display in the French Riviera town of Nice. A truck ploughed into a crowd in the French resort of Nice on July 14, leaving at least 60 dead and scores injured in an "attack" after a Bastille Day fireworks display, prosecutors said on July 15. / AFP PHOTO / Valery HACHE |

Nice: A truck ploughed into a crowd in the French resort of Nice, killing at least 84 in what President Francois Hollande today called a “terrorist” attack on revellers watching a Bastille Day fireworks display.

The driver was shot dead after barrelling the truck two kilometres through the festive crowd on the palm-lined Promenade des Anglais, sending hundreds fleeing in terror and leaving the area strewn with bodies. Authorities said they found identity papers belonging to a 31-year-old French-Tunisian citizen in the truck, as well as “guns” and “larger weapons”.

The attack was of an “undeniable terrorist nature,” a sombre Hollande said in a televised national address, confirming that “several children” were among the dead as families came together to celebrate France’s national day. The bloodshed came on Bastille Day, a celebration of everything France holds dear, its secular republic and the values of “Liberte, Egalite, Fraternite” (Freedom, Equality, Fraternity). 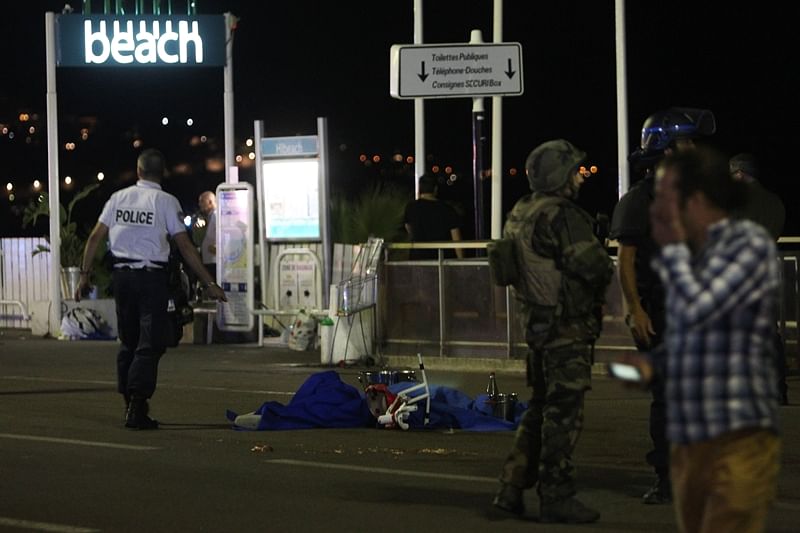 The attacker struck after a day of military pomp and ceremony in Paris — where armed forces, tanks and fighter jets swooped down the Champs Elysees avenue — and spectacular firework displays. “France was struck on its national day … the symbol of freedom,” said Hollande.

A photograph showed the front of the truck riddled with bullet holes and badly damaged, with burst tyres. A lone doll lay abandoned on the promenade where families celebrated the holiday just hours earlier. Robert Holloway, an AFP reporter who witnessed the white truck driving at speed into the crowd, described scenes of “absolute chaos”.

“We saw people hit and bits of debris flying around. I had to protect my face from flying debris,” he said. Interior Minister Bernard Cazeneuve told reporters on the scene that the death toll stood at 84, with scores injured including 18 in “critical condition”. The attack is the third major strike against France in less than 18 months and prosecutors said anti-terrorist investigators would handle the probe.

It comes eight months after Islamic State attacks on Paris nightspots left 130 people dead, dealing a hard blow to tourism in one of the world’s top destinations. US President Barack Obama condemned “what appears to be a horrific terrorist attack”, although no group had yet claimed responsibility.

Hollande announced he would extend France’s state of emergency for three months in the wake of this latest attack and “step up” the government’s action against jihadists in Syria and Iraq. He also called up army reservists to bolster the country’s security services that are stretched to the limit.