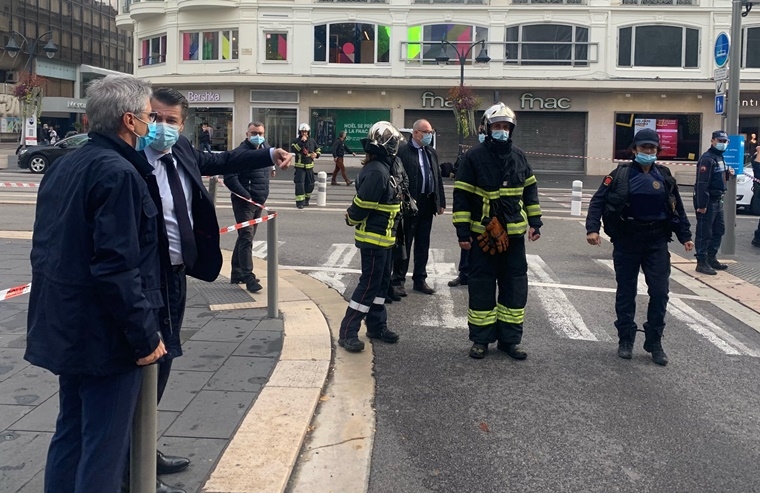 At least three people were killed and several others injured in a knife attack near a church in the French city of Nice on Thursday. Meanwhile, in two other related incidents, a man was shot dead after attacking the police with a knife in Avignon, France, while another was arrested after stabbing a guard at a French consulate in Jeddah, Saudi Arabia.

The knife attack in the French city of Nice has left at least three people dead and several injured, French officials said on Thursday. The knife-wielding attacker shouting "Allahu Akbar" reportedly beheaded a woman and killed two other people in the suspected terrorist act that too place at a church in Nice.

President Emmanuel Macron was heading to the city, while Interior Minister Gerald Darmanin held a crisis meeting as he warned people to avoid the site of the attack, Al Jazeera reported.

"I can confirm everything suggests this was a terror attack in the Notre-Dame Basilica," said Mayor Christian Estrosi, a former MP with the right-wing Republicans party, in a tweet.

In another tweet, he said, "I spoke with the president on the phone, he extended his gratitude to the Nice police and all the security forces, and asked me to extend his support to the residents of Nice, where he will arrive late this morning."

Within hours of the attack, a separate incident was reported in Montfavet, near the southern French city of Avignon, where the police shot dead a man who was threatening passerby with a handgun. Radio station Europe 1 reported that this man, too, was shouting "Allahu Akbar"

Shortly afterwards, Saudi Arabia's state-run news agency reported that a Saudi man was detained after stabbing and slightly wounding a guard at the French Consulate in the city of Jiddah. The Saudi Press Agency report on Thursday offered no motive for the attack.

The reports of the attacks come at a time when France is under a high alert for terrorist attacks.

The country is reeling from heightened tensions after an assailant decapitated Samuel Paty, a French middle school history teacher in the greater Paris area, who showed caricatures of the Prophet Mohammed to his students for a class on freedom of speech.

Those caricatures were published by Charlie Hebdo and cited by the men who gunned down the newspaper's editorial meeting in 2015.