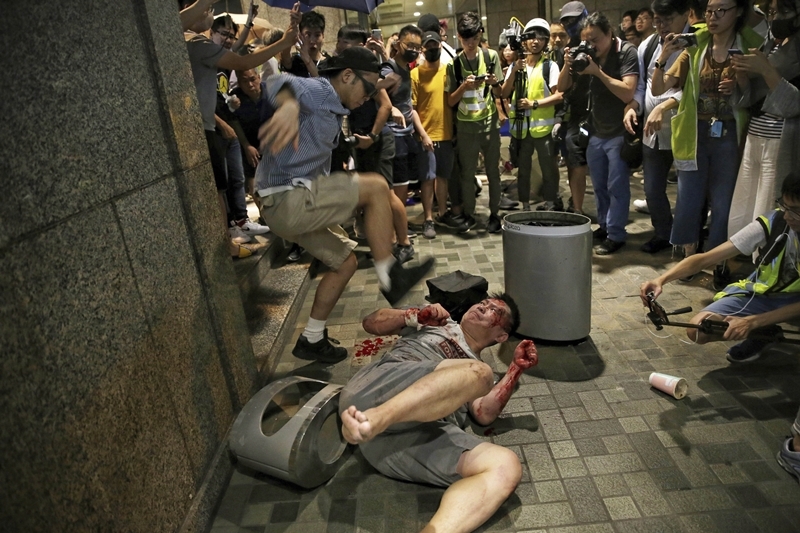 Hong Kong: A man went on a knife rampage in Hong Kong late Sunday leaving at least five people wounded, including a local pro-democracy politician who had his ear bitten off, capping another chaotic day of political unrest in the city.

The violence was less sustained than Saturday when police and protesters fought hours of cat and mouse battles after thousands took the streets for an unsanctioned march.

But the day ended with a knife attack taking place outside a shopping mall in Tai Koo Shing, a middle-class neighbourhood on the main island where protesters had gathered for much of the afternoon.

Live footage showed Andrew Chiu, a local pro-democracy councillor, having his ear bitten off after trying to subdue the attacker, while a second man was seen unconscious in a growing pool of blood as bystanders desperately tried to stem wounds to his back.

The alleged assailant, wearing a grey t-shirt, was then beaten bloody by the crowd until police and other emergency workers arrived.

Hospital authorities said five people were wounded, four men and one woman. Two victims were in a critical condition, two were serious and one was stable.

Police revised down their wounded toll from six to five people and said three people were arrested, without detailing whether the alleged knife attacker was among those counted as injured or arrested.

An eye-witness, who gave her surname Leung, told RTHK News that the man shouted in Mandarin — the language spoken on the Chinese mainland — before attacking her brother-in-law who argued with him.

“The man came out from the doorway and yelled a sentence in Mandarin, it seemed like liberate Taiwan or something,” she said.

Speaking to reporters outside the hospital where Chiu was taken to, pro-democracy lawmaker James To said the attacker shouted “reclaim Taiwan and Hong Kong”.