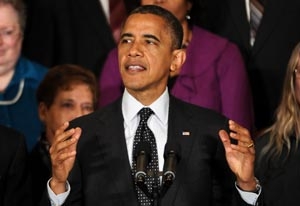 Washington : US President Barack Obama made it clear on Friday that his top priority is to address America’s ongoing economic problems, inviting lawmakers to find a compromise that would avoid the impending budget cuts known as the “fiscal cliff”.

“This was a central question during the election,” Obama said. “The majority of Americans agree with my approach. Our job now is to get a majority in Congress to reflect the will of the people.”

Taking aim at the House of Representatives – where the opposition Republican Party held its majority in Tuesday’s elections – Obama invited congressional leaders to the White House next week for talks on how to avoid key spending cuts and a series of tax increases set to go into effect at the beginning of next year.

While saying that he is willing to compromise, the president acknowledged his plan would call for higher taxes on the rich, a move Republicans have vehemently opposed. “All we need is action from the House,” Obama added. “I’ve got the pen. I’m ready to sign the bill right away.”

After his speech Friday, Obama’s spokesman said that the president would veto any legislation that would extend tax cuts for families making $250,000 or more. Part of the fiscal cliff is the impending budget cuts which were a provision under the Budget Control Act of 2011, a law which ended a debt-ceiling crisis and averted US financial default.

The other part is the expiration of Bush-era tax cuts, which were directed at the middle class and those Americans making more than $250,000 a year. Obama supports extending tax cuts for only the first group.

Republicans want all of the Bush tax cuts extended. “If Congress fails to make an agreement, everybody’s taxes will automatically go up on January first,” Obama said. The president spoke a few hours after House Speaker John Boehner, a Republican, said Congress would oppose any tax hikes, but may be open to new government revenues through reform.

“I’m proposing that we avert the fiscal cliff together in a manner that ensures that 2013 is finally the year that our government comes to grips with the major problems that are facing us,” Boehner said.

Obama said the nation should reduce its $16 trillion federal debt in a “balanced and responsible way”, which he insists should not only include higher taxes on the wealthy, but also spending cuts to middle class programmes. —IANS