Faithful flock to Bethlehem for Christmas 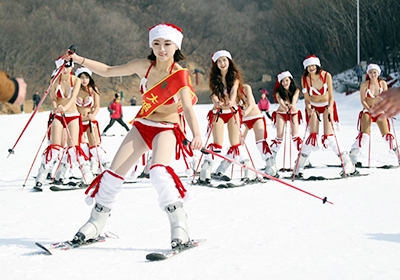 A woman wears Santa Claus-themed bikini while skiing at a ski resort in Xuchang, China's Henan province to welcome the coming Christmas in temperatures below zero Celsius. |

Bethlehem (Palestinian Territories) : Pilgrims from across the world descended on Jesus’s birthplace in Bethlehem on Wednesday to begin the global celebration of Christmas after a violence-plagued year brought suffering to many Middle Eastern Christians. The not-so-little West Bank town was bustling with activity ahead of the biggest night of the year which will culminate in midnight mass at the Nativity Church built over the spot where Mary gave birth to Jesus.

“For many of you, the music of your Christmas hymns will also be accompanied by tears and sighs,” Pope Francis wrote in a long letter addressed to Christians in the Middle East.    Even in the Palestinian territories, Christmas will be a deliberately low-key affair after a July-August war with Israel which left nearly 2,200 Gazans dead and the tiny enclave in ruins in the third such conflict in six years.

Cars carrying foreign pilgrims could be seen passing through the festooned streets of Bethlehem early on Wednesday.

Melbourne: A family in Australia has won a whopping 30 million Australian dollars lottery just ahead of Christmas, ringing in the celebrations early. Canberra’s luckiest lady bought the winning ticket at newsXpress in Woden on December 16, but was unaware she was the proud owner of the golden ticket for nearly a week, the Canberra Times reported.    “I was finishing off my Christmas shopping today and saw a sign at the outlet urging customers to check their entries because they had sold the 30 million Australian dollar ($24 million) winning Oz Lotto ticket,” the woman was quoted as saying by the paper. “I thought I’d better check my Oz Lotto entry but I never considered that I actually had the winning ticket. I never win anything,” she said.                The family – whose identity has not been revealed – plan to pay off their mortgage and want to fly first class on their next overseas holiday.