BRUSSELS-- The following are the latest developments of the COVID-19 pandemic in European countries.

ROME -- The coronavirus pandemic has claimed 21,645 lives in locked-down Italy, bringing the total number of infections, fatalities and recoveries so far to 165,155, according to the latest data released by the country's Civil Protection Department on Wednesday.

The number of COVID-19 patients hospitalized showed a relevant drop, with 27,643 hospitalized, down by 368 compared with the previous day, including 3,079 in intensive care units, down by 107. Meanwhile, 74,696, or about 71 percent, are isolated at home because they are asymptomatic or with light symptoms, Civil Protection Department Chief Angelo Borrelli told a televised press conference.

There were 578 new fatalities on a daily basis, Borrelli said, adding that active infections rose by 1,127 compared to Tuesday to a total of 105,418. 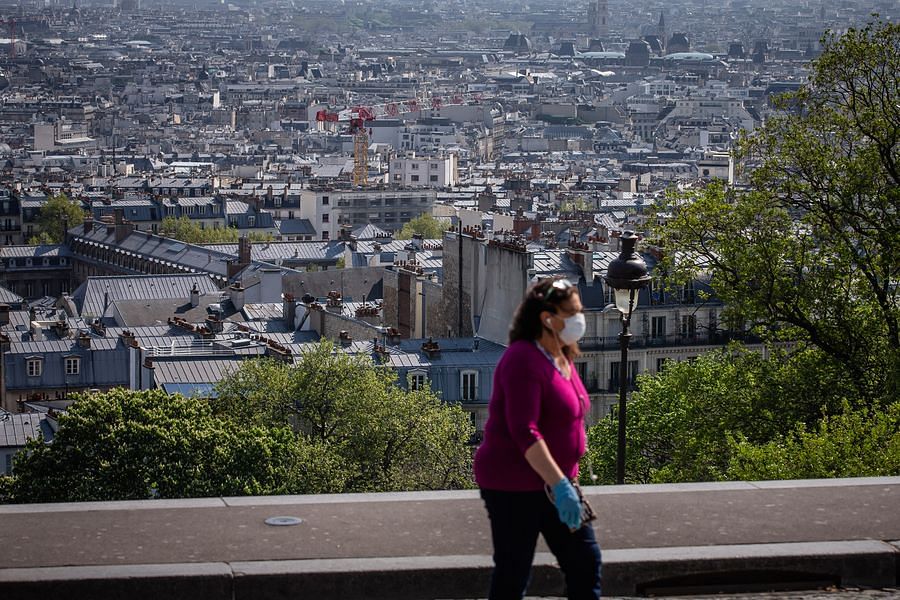 A woman wearing a mask walks at Montmartre in Paris, France, April 13, 2020. | Photo by Aurelien Morissard/Xinhua

PARIS -- The deaths caused by the coronavirus surged to 17,167 in France where confirmed cases, number of hospitalized patients and those who need intensive care were decelerating, Health General Director Jerome Salomon said on Wednesday.

Fatalities in hospitals increased to 10,643 while the counting of nursing homes found 6,524 residents died from the respiratory illness since the epidemic outbreak.

Compared to Tuesday's 15,729, the death data jumped sharply but this was linked to a "catching up" in the data feedback, said Salomon. Photo taken on April 14, 2020 shows a man walking in front of the Houses of Parliament in London, Britain. | Xinhua/Han Yan

LONDON -- The death toll of those hospitalized in Britain who tested positive for the novel coronavirus hit 12,868 as of Tuesday afternoon, a daily increase of 761, the Department of Health and Social Care said Wednesday.

As of Wednesday morning, the number of confirmed cases of COVID-19 in Britain reached 98,476, said the department.

Meanwhile, the Office for National Statistics (ONS) has suggested the total number of virus-related deaths in Britain is significantly higher than the figures published by the National Health Service (NHS) and the health department, which only count hospital deaths. Customers queue with distance for purchasing at a supermarket in Berlin, capital of Germany, March 23, 2020. | Photo by Binh Truong/Xinhua

BERLIN -- German Chancellor Angela Merkel announced on Wednesday generally extending the country's nationwide social distance restrictions which have been in force for weeks, until at least May 3.

This was agreed by German federal and state governments after consultations on Wednesday. The current restriction measures, including a ban on public gatherings of more than two people, a social distance of minimum 1.5 meters and the closure of non-essential businesses, are scheduled to be valid until Sunday.

To support tracking infection contacts, the use of digital "contact tracing" is centrally important, said Merkel. she also suggested wearing non-medical everyday masks where the minimum distance cannot be guaranteed such as on public transport.