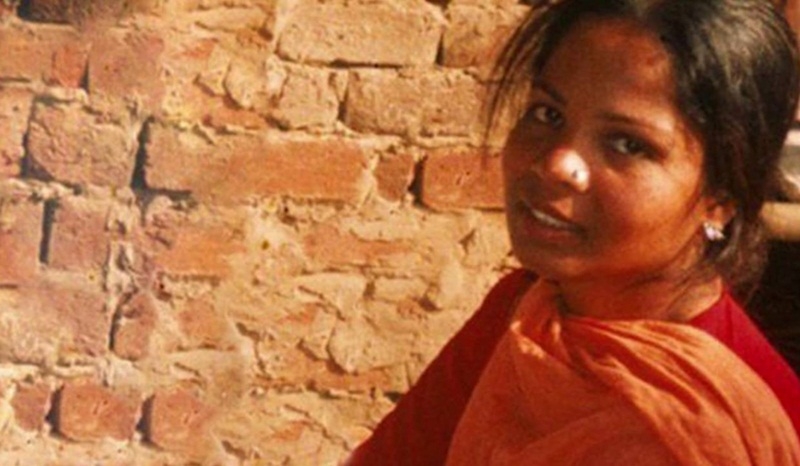 Islamabad: Aasia Bibi, a Pakistani Christian woman who was freed from death row by the Supreme Court in a high-profile blasphemy case that polarised the society, has quietly left the country and reunited with her family in Canada, her lawyer said Wednesday. Bibi, a mother of four from Punjab province, was taken out of the Muslim-majority country after repeated death threats from religious extremists, following the quashing of her conviction for blasphemy last year.

The 47-year-old mother of four was convicted in 2010 after being accused of insulting Islam in a row with her neighbours. She always maintained her innocence, but has spent most of the past eight years in solitary confinement. “Aasia Bibi has left the country. She is a free person and travelled on her independent will,” a source in the foreign office was quoted as saying by the Dawn newspaper. Bibi’s counsel Saiful Malook confirmed that she has reached Canada.

“It is a big day. Asia Bibi has left Pakistan and reached Canada. She has reunited with her family. Justice has been dispensed,” he said. Her children are already in Canada. Asia Bibi was the first woman to be sentenced to death under Pakistan’s controversial blasphemy laws. Under Pakistan’s penal code, the offense of blasphemy is punishable by death or life imprisonment.

Asia Noreen – commonly known as Asia Bibi – was kept at a secret location while arrangements were made for her to leave the country. The Supreme Court’s quashing of her sentence on October 31 last year led to violent protests by religious hardliners who support strong blasphemy laws, while more liberal sections of society urged her release. The judgement triggered protests across Pakistan with protestors led by Islamic political party Tehreek-i-Labaik Pakistan and other groups blocking major highways and roads in different parts of the country.

Malook said that Bibi’s safe arrival in Canada was the result of hard work by activists, foreign diplomats and others who stood by Bibi in hard times and worked for her freedom. The British Pakistani Christian Association said in a statement that they had received confirmation from a British diplomat that Aasia Bibi had safely exited Pakistan. Geo News quoted sources as saying that her travel documents were made a month ago. The Pakistan government had in November rejected reports claiming Aasia Bibi has fled abroad, saying the images on the social media showing the recently-acquitted Christian woman being greeted overseas are “fake”. It was reported in local media that she was taken to Noor Khan Airbase Rawalpindi, from where she would be shifted to the Netherlands. Earlier, Italy had said it would help Bibi leave the country because her life was in danger following charges of blasphemy that put her on death row for eight years. Her husband had also urged the US president, and the UK and Canadian premiers to help her leave the country for her life. Bibi’s husband Ashiq Masih in a video message had appealed to the world leaders to help Aasia leave Pakistan for her safety.