HomeWorldBenjamin Netanyahu ousted after 12 years at the helm - Who is new Israel PM Naftali Bennett?

Benjamin Netanyahu ousted after 12 years at the helm - Who is new Israel PM Naftali Bennett?

Israel's outgoing Prime Minister Benjamin Netanyahu shakes hands with his successor, incoming Prime Minister Naftali Bennett, after a special session to vote on a new government at the Knesset in Jerusalem, on June 13, 2021. | Photo: AFP
Follow us on

Israel Prime Minister Benjamin Netanyahu's 12 year stint at the helm of affairs came to an end on Sunday as the Knesset (Parliament) elected Naftali Bennett as the as the 13th Prime Minister of Israel. The 49-year-old leader of the right-wing Yamina party took oath of office with a razor-thin majority of 60-59 in the 120-member house.

A former ally of Benjamin Netanyahu, Bennett's ultranationalist Yamina party had won just seven seats in the 120-member Knesset in the March 2021 elections. His refusal to commit to Netanyahu or his opponents however led to the now Prime Minister assuming a crucial role in the political situation.

The new eight party government features two left, two centre, one Arab Islamist and three right-wing parties, who hold a razor-thin majority and was unified in part by their desire to overthrow Netanyahu's administration. Needless to say, Bennett will find himself constrained by the ideologically diverse coalition that he now leads.

As Israel's longest serving leader is relegated to the Opposition, celebrations have broken out in various parts of the world as well as online. On Sunday night, US President Joe Biden offered congratulations to Naftali Bennett, reportedly highlighting his decades of support for the bilateral relations and his unwavering commitment to Israel's security.

Where does Bennett stand ideologically speaking?

While Israel's new prime minister is a right-wing leader, he also embodies many contradictions and is considered to be an eminently pragmatic individual. He's a religious Jew who made millions in the mostly secular hi-tech sector and a champion of the settlement movement who lives in a Tel Aviv suburb.

Bennett had campaigned as a right-wing stalwart ahead of the March elections and signed a pledge on national TV saying he would never allow Yair Lapid, a centrist and Netanyahu's main rival, to become prime minister. Ironically, this is exactly what he will be doing in about two years, as per the coalition agreement. 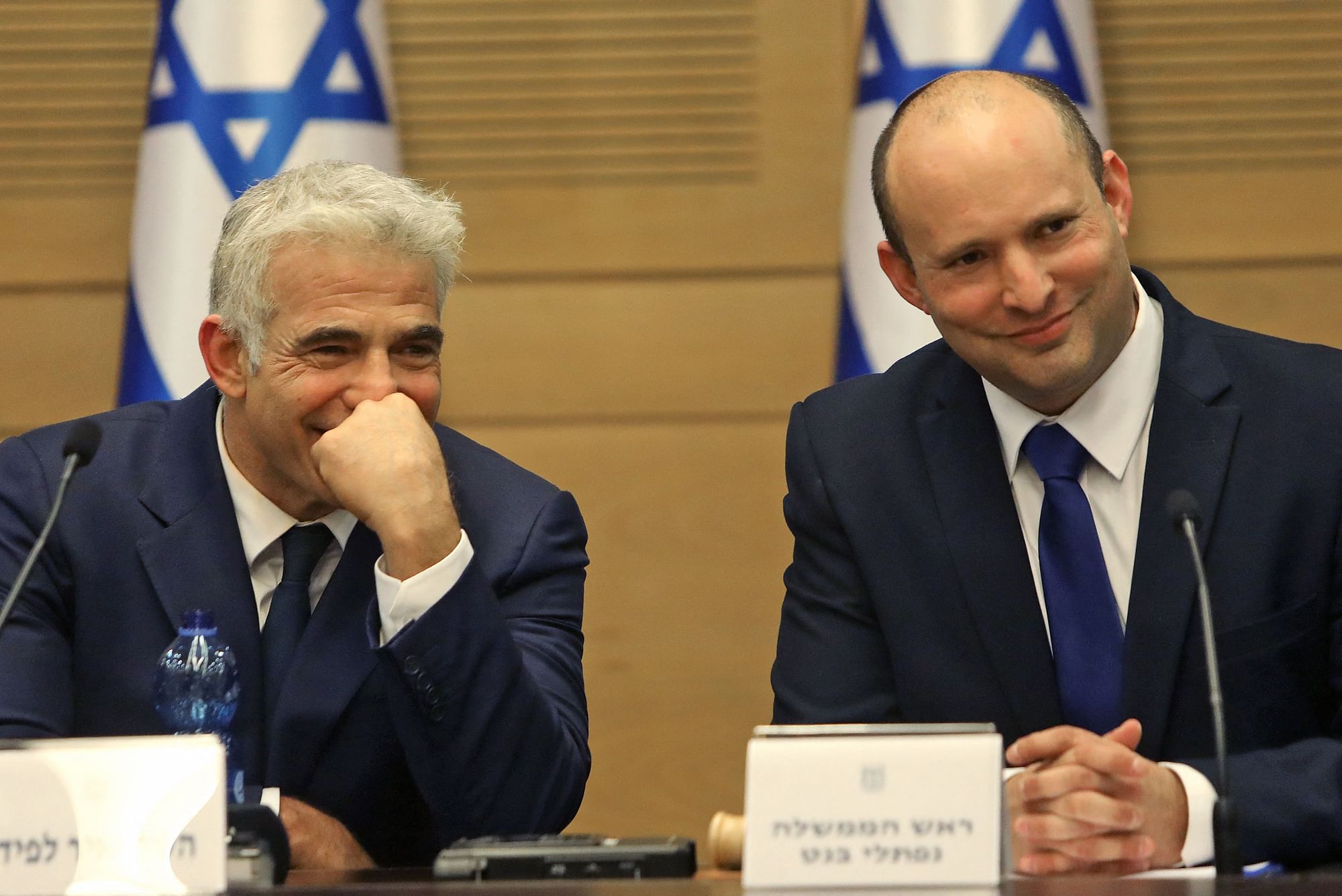 Israels incoming Prime Minister Naftali Bennett and Alternate Prime Minister and Foreign Minister Yair Lapid look on during an address at the Knesset in Jerusalem on June 13, 2021. | Photo: AFP

The father of four is a modern Orthodox Jew, and will be Israel's first prime minister who regularly wears a kippa. He began life with his American-born parents in Haifa, then bounced with his family between North America and Israel, military service, law school and the private sector. He had briefly served as head of the West Bank settler's council, Yesha, before entering the Knesset in 2013. Bennett later served as cabinet minister of diaspora affairs, education and defense in various Netanyahu-led governments.

While he shares Netanyahu's approach to the Middle East conflict and had even served as the former PM's chief of staff for two years, the two parted ways after a mysterious falling out. He is opposed to Palestinian independence and strongly supports Jewish settlements in the occupied West Bank and east Jerusalem, which the Palestinians and much of the international community see as a major obstacle to peace. Bennett had fiercely criticised Netanyahu after the prime minister agreed to slow settlement construction under pressure from President Barack Obama.

Will the coalition survive?

In his address to parliament, Netanyahu vowed to bring down this "dangerous government", making it clear that he has no plans on giving up leadership of the Likud Party. Opinion polls suggest that the majority of Israelis are not too hopeful. While a fifth election may have been averted for the moment, the longevity of the coalition remains a question. After all, Yamina, Yair Lapid's Yesh Atid, New Hope, Labor, Meretz, United Arab List, Kahol Lavan and Yisrael Beiteinu do not see eye-to-eye on most of the critical issues facing the country.

According to reports that quote Yohanan Plesner, the head of the Israel Democracy Institute, who has known Bennett for decades and served with him in the military, Bennet is likely to engage with other factions to find a "common denominator" as he seeks support and legitimacy as a national leader.

What has been the response?

The news has also sparked off celebrations in various parts of the country. Visuals shared online show a massive number of people dancing and cheering on the streets of Tel Aviv, Jerusalem and other places. Some hold flags, while others carry floats or brandish beverages as fragments of foam rain down.