Kandahar: One civilian was killed and three more were injured in a roadside blast in Mazar-e-Sharif, the capital of the Balkh province in northern Afghanistan, local media reported on Monday.

"One civilian was killed and three more were wounded in a roadside blast in the city of Mazar-e-Sharif this afternoon, Balkh police said," Tolo News tweeted.

However, no group has claimed responsibility for the attack.

Meanwhile, violence has escalated in Afghanistan in recent weeks as the Taliban have intensified their offensive against civilians, Afghan defence and security forces.

This comes in wake of foreign troops' drawdown from the war-torn country.

Over the last few weeks, the Taliban have captured several districts in Afghanistan. The city of Zaranj, near the Iranian border, became the first provincial capital to fall into Taliban control on Friday.

In a major blow to the Afghan government, the Taliban have so far seized control of Kunduz in northern Afghanistan, Taluqan city, Sheberghan and Samangan province's capital Aybak city. 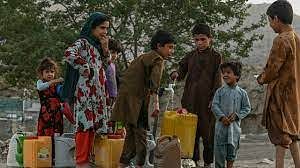