3 dead in a suicide bombing on a Saudi Shiite mosque 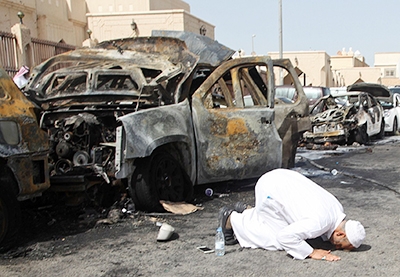 Riyadh : A suicide bomber disguised in women’s clothing blew himself up at the entrance to a Saudi Shiite mosque during Friday prayers killing three people, the interior ministry said, reports AFP.

The Islamic State jihadist group claimed the attack, the second in a week.  “Authorities have managed to foil a terrorist crime targeting people performing the Friday prayers at Al-Anoud mosque in Dammam,” capital of Eastern Province, said a ministry spokesman quoted by the Saudi Press Agency.  The bomber “detonated the explosive belt he was wearing at the mosque entrance as security officials were on their way to inspect him,” said the spokesman, citing preliminary investigation results.

The explosion went off just as the attacker’s car stopped at a parking lot near the Shiite mosque, the spokesman said.

The explosion killed the attacker as well as three others and wounded four people, he said. The spokesman had earlier said the car exploded as security officials headed towards it. Other nearby vehicles caught fire.

The blast comes seven days after a May 22 suicide bombing on a Shiite mosque in a village in Eastern Province killed 21 people. IS also claimed that attack.