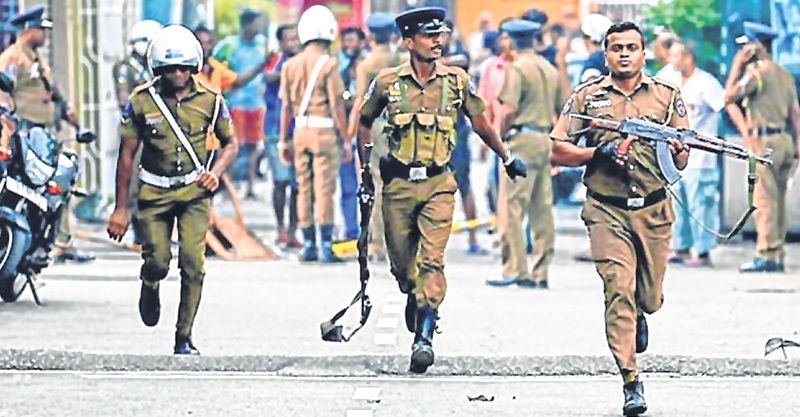 Colombo: Six children and three women were among 15 people killed when militants linked to the Easter Sunday bombings opened fire and blew themselves up during a fierce gun battle with security forces in Sri Lanka’s Eastern province, police said Saturday.  The shootout occurred as the security forces continued their hunt for members of the National Thowheeth Jamaath (NTJ), the local terror outfit behind the April 21 coordinated blasts in which 253 people were killed and over 500 injured.

The Special Task Force and Army troops, following a tip-off, raided a house in Kalmunai city, about 360 kms from Colombo, on Friday night, leading to the heavy exchange of fire with the armed group.  As the heavily-armed men opened fire on troops, a civilian caught in the middle got killed. As the clashes intensified, three men are believed to have set off explosives.  “A total of 15 bodies recovered, six men, three women and six children. At least four suspected suicide bombers are dead and three others who were injured are in hospital,” a police spokesperson said.

A police spokesman said that three suspected suicide bombers were among the 15 dead. “When the police was doing a joint search operation in Sainthamuruthu, gunfire was directed at them,” police spokesman Ruwan Gunasekera said.  A suicide blast took place and the body of a terrorist with a T56 assault rifle was also found at the site. A huge cache of explosives was also recovered from the spot. “Officials have recovered detonators, suicide kits, army uniforms and ISIS flags,” an army officer said.

Meanwhile, the police said that curfew imposed in the Muslim-majority areas of Kalmunai, Chavalakade and Sammanthurai would continue until further notice. At least 76 people have been arrested by the police in connection with the attack so far. Twenty were arrested in the last 24 hours.  Officials also seized one kg of explosives near a railway station at Wellawatta, a popular south Colombo suburb. The curfew was lifted for other areas at 4 am on Saturday.