But as of early Monday morning, the blaze was brought under control by firefighters almost 10 hours later, reports Efe news. 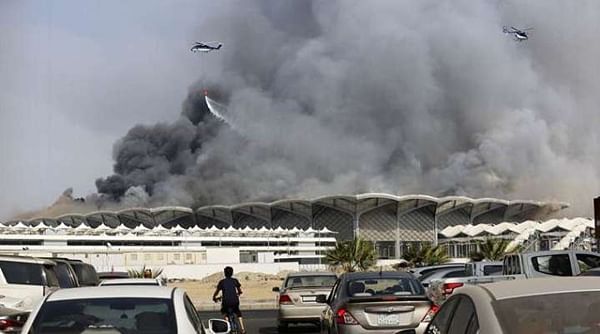 Jeddah: At least 11 people were injured in a fire at the Haramain high-speed rail station in Jeddah, Saudi Arabia, forcing the suspension of train services.

But as of early Monday morning, the blaze was brought under control by firefighters almost 10 hours later, reports Efe news.

Saudi Arabia Civil Defence and Makkah Province Emirate - on their respective Twitter accounts - said that firefighters were continuing to use assorted techniques to cool down the station.

There were no fatalities in the blaze, but train services has been suspended for the safety of the passengers, officials said.

The Jeddah Health Directorate reported on Twitter that 11 people had been injured, with eight of them remaining hospitalized and in "stable" condition, two having been released after being treated and one having left the hospital voluntarily.

The blaze started in the station's ceiling on Sunday, according to initial reports. Videos of the fire circulated on Twitter, showing thick billows of smoke, the Al Arabiya newspaper reported.

Civil defence forces and helicopters were seen trying to put out the fire.

Currently, the railway runs 35 commercial trains and a luxury train for the king, and it has a contract to operate and provide maintenance for the system for the next 12 years.