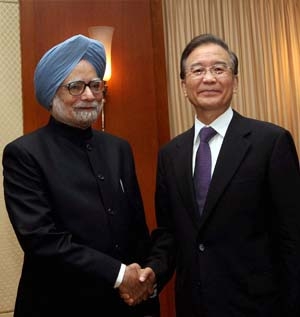 India is not up to facing the Sino-Pak challenge says DR GAUTAM SEN.

India’s endeavours in relation to China and Pakistan epitomise a continual straining of hope against experience. Mordant experience periodically reasserts itself because actual warfare breaks out. Yet, the most egregious acts of terrorism still fail to provoke an enduring re-orientation of India’s underlying perspectives.

Persistent amnesia overwhelms most Indian politicians and its bureaucracy, lapsing into deluded Gandhian coma. Despite these perverse impulses, the reinforcement of India’s armed forces, after the intrusion of hard reality in 1962, indicates a paradoxical confession of self-doubt. It is apparently the sturdy bridge of realism between the reverie of fantasies and the perils of dire reality.

The imperative of searchingly assessing the enemy’s intentions has long been overwhelmed by desire, the so-called aman ki asha, evidently an Indian variant of the Stockholm syndrome. It instigates yearning to gratify the tormentor and highlights a measure of self-loathing. Indians are also apt to write indigestible tomes arguing the enemy’s case, as one protagonist has done recently over the border dispute with China.

He is now a cherished participant in the on-going Track 2 engagement with Pakistan that the Indian armed forces fear might insist Indian territory in Siachen be demilitarized A serious reflection on the enemy’s goals threatens to create cognitive dissonance for many Indians, susceptible to petty self-aggrandisement and thorough intellectual bewilderment, by introducing them to unwelcome home truths. But it is unavoidable.

In the case of Pakistan, three goals were espoused before its inception or immediately after realization of the dream of sectarian purity that has turned into a nightmare of death and delusion. The first is the aspiration to compete with India as an equal if not superior nation, against all the evidence of its intrinsic unfeasibility.

A second goal regularly asserted by Islamist ideologues in Pakistan and their financial sponsors in the Middle East is the restoration of a Caliphate to rule India. Mohammed Ali Jinnah himself, for whom some Bharatiya Janata Party leaders now evince special affection, had proposed to the British to ‘cut out the Hindus’ and rule India conjointly with them, without the vexation of Congress participation.

The ignorant lawyer had imagined Hindu political involvement was a novelty until the arrival of the British in India and Mughal rule untrammelled In fact the Maratha Confederacy controlled three quarters of India before Britain’s reprise. The third Pakistani goal is to wrest Kashmir from Indian control. Delhi’s semi-literate political and media coteries, possessed of third rate minds, but bestowed prodigious incomes and sipping duty free diplomatic blends, suppose that once Kashmir is handed over to Pakistan, all will be well. A motley crew of British intelligence agents, embedded in Delhi in the guise of journalists, propagate this vista in its gruesome salons to imbecilic local audiences.

This is a scenario that was also portentously recommended, at a New York dinner some years ago, by a renowned Indian economist to none other than the redoubtable Manmohan Singh before he became India’s nominal Prime Minister.

The threatened Siachen retreat stems from the same absurd impulse. Neither has a back-up option for what might be India’s response if Pakistan decided to use the strategic advantage gained by the resultant Indian blunder for further aggrandizement, as it avowedly would.

If Pakistan continues to use instruments of terror after gaining this significant strategic ground, what novel alternatives would India have acquired, having conceded it, to employ as persuasive deterrents that it did not possess earlier?

Pakistan may or may not seek additional Indian territory or control over rivers on the grounds that it is necessary for its national survival. But, as night follows day, it will surely claim it has a duty to protect co-religionists who are allegedly being oppressed by India’s Hindu majority.

This is a case, which countless Indians themselves will make for Pakistan by fabricating evidence. And Pakistan will assert its right to intervene from a position of vastly enhanced armed capability, thanks to Indian territorial concessions that will have weakened it vastly.

Indeed, the increase in Islamic terrorism since the Gujarat riots of 2002 has occurred with the active connivance of an utterly reprobate and compromised Indian media, with Islamic terrorists routinely quoting it and some Indian politicians to justify terrorism.

Needless to say, much of the evidence for the primary culpability of State agencies for the dismal events of 2002 is either threadbare or non-existent, as the Supreme Court’s SIT, appointed by Narendra Modi’s critics to condemn him, has now affirmed. But it has had no impact on the political discourse, presided over by India’s ruling party, oblivious to the devastating consequences of inciting Muslim animus or perhaps deliberately complicit because it angers and mobilises vote banks.

China and Pakistan have been operating for sometime with extraordinary synergy in devising instruments of unconventional warfare to cause India maximum distress. China is evidently active arranging discreet meetings for Pakistanis and Indian Naxalites in its Kathmandu embassy and providing technical advice on the art of counterfeiting Indian currency.

It is also assisting Pakistani military preparations along the Line of Control in Kashmir and ensuring open sesame largesse to enhance Pakistan’s acquisition of nuclear warheads and delivery systems. It was surely aware of the 26/11 terror assault against Mumbai in advance since action against India that might provoke military retaliation requires its prior approval to ensure that it would come to Pakistan’s aid.

Even if India demilitarises its own territory in Siachen and, god forbid, embarks on some impetuous concessions over the Kashmir valley, perhaps along the lines proposed at that fateful New York dinner, Pakistan will act against India at the behest of China.

And Pakistan has acquired impressive influence over its co-religionists across the border, facilitated by demonic fundamentalists in Riyadh. And a timid Indian society has been cowed by a combination of home-grown terror and vote banks that shield it from determined chastisement.

China’s main requirement from India is the expulsion of the Dalai Lama and disbanding of the Tibetan government-in-exile, which it perceives as an unresolved menace to its national interests. It holds India fully responsible for these severe irritants and considers them potentially remediable if sufficient pressure is applied.

Dr Gautam Sen has taught Political Economy at the London School of Economics.