Pritam received Sahitya Akademi award and Padma Vibhushan, among many other accolades for here literary contribution, according to Culture India website.

New Delhi: Internet giant Google on Saturday marked the 100th birth anniversary of celebrated poet and author Amrita Pritam with a special doodle tribute that had a touch of Punjabi culture. Pritam, one of the most prominent writers and poets of the 20th century, is best remembered for her Punjabi poem 'Ajj aakhaan Waris Shah nu' ('Ode to Warish Shah'), which poignantly captures her anguish over the massacres during the Partition in 1947.

Born on August 31, 1919 in Gujranwala (now in Pakistan) of Punjab province in undivided India, she migrated to India after the Partition. In the doodle, the poet-author is seen wearing a traditional Punjabi salwar suit, sitting beside a bunch of roses, as she pens something in a diary. In 'Ode to Warish Shah', an 18th century poet, she captures the pangs and pains of people and the country being cleaved, and one of the moving lines from the poem reads -- "Arise, o friend of the afflicted; arise and see the state of Punjab, Corpses strewn on fields, and the Chenaab flowing with much blood".

Among her plethora of novels, 'Pinjar' (The Skeleton), written against the backdrop of the Partition, is considered to be one of the best literatures written on the subject, with a memorable character 'Puro'. The novel was later adapted into an award-winning film 'Pinjar' in 2003.

In 1947 at the time of the Partition she moved to New Delhi, where she began to write in Hindi, according to the website of SAWNET (South Asian Women's Network). A number of her works have been translated into English, including her autobiographical works "Black Rose" and "Rasidi Ticket" ('Revenue Stamp'), it said. She became a published writer in 1936, when she was barely 17 years old. And, she joined the Progressive Writers' Movement to inspire people through her literary works.

Pritam received Sahitya Akademi award and Padma Vibhushan, among many other accolades for here literary contribution, according to Culture India website. 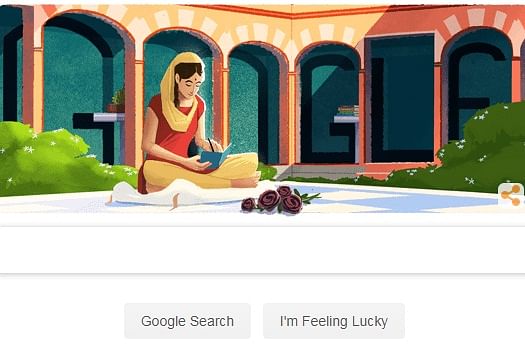