The entire incident was caught on the CCTV camera and the video has now gone viral on social media.

A man in Florida, US named Walter Hickox is all over the news for a special reason. He tackled a dangerous black bear to save his dog. The entire incident was caught on the CCTV camera and the video has now gone viral on social media. The clip was also shared on Viral Hog’s Instagram account and it has close to 1 lakh views. The incident occurred at Hickox’s home in Daytona Beach in Florida.

The video shows Hickox jumping in the scene to save his pet dog as the black bear tried to enter what appears to be the front porch. He tried to push away the deadly animal and in the process, got bitten and endured some scratches, Daily Mail reports. Hickox tried barricading the doorway with a bench lying there in order to prevent the bear from breaking into the porch again.

In the CCTV footage he can be heard yelling to Kerry, his wife, “Oh my God, I've been attacked by a bear.”

“Not a lot went through my head at the moment, other than what’s going to happen if he gets past me and into the house where the rest of my dogs and my wife were at,” Hickox told WFTV9, Daily Mail reports.

Hickox first thought it was the neighbours’ dog who had attacked his pets.

Meanwhile, the internet is hailing Hickox who almost risked his life to save his pet dogs. Some users called him "dog dad of the year" while others too showered him with praises for his bravery.

See some of the comments below: 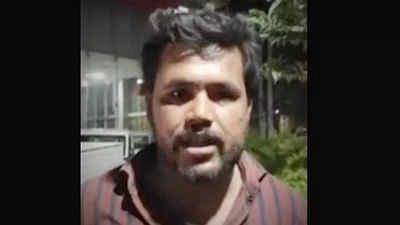 Karnataka: Humiliated farmer brings Rs 10 lakh within an hour after being turned away by salesman...