he clip has gone viral and has gained 50 thousand views.
FPJ Web Desk 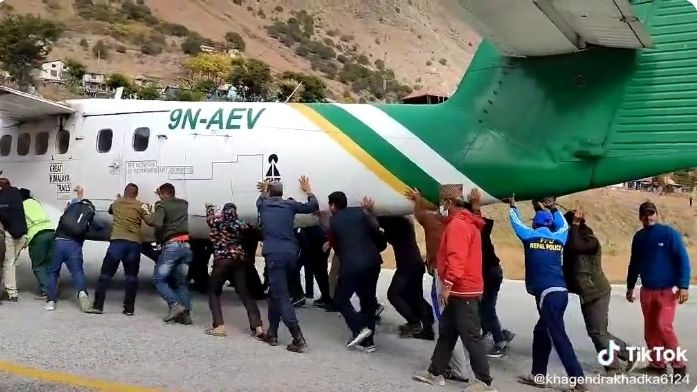 A video of a group of passengers trying to push an aircraft away from the runway is being widely circulated on the internet. The incident that took place at an airport in Nepal has left netizens stunned. The video was posted on Twitter by a user named Samrat.

The video begins with a shot of an aircraft belonging to Tara Airlines. As the videos progresses, the passengers can be seen trying hard to push the plane away from the runaway.

As per a report by Nepal News, the rear tyre of the plane burst on the runway, which compelled the passenger to get down and push the air craft away from the landing pitch. The incident happened at Bajura airport.

The clip has gone viral and has gained 50 thousand views. While some social media users were worried about the safety of the passengers, others commented on how the aviation authorities should indulge in more thorough checks before flying the aircraft.

Just another normal day at office for hilly and mountainous aircraft system. Often happens during the winter season. https://t.co/Ny54GVsGpB

That guy pushing the wheels who thinks he is contributing.😂😂 https://t.co/py7A2dIOOf

Ignorant ppl are making fun of #TaraAir 's video after a burst tire, can happen to any airline, but this is more fault of @hello_CAANepal who do not have required ground equipment in STOL airports it operates. They charge airlines good money but don't provide the service needed. https://t.co/nWnYy2lASg