A 44-year old Kerala woman police officer has donated her impossibly long hair for the cause of cancer patients,
PTI 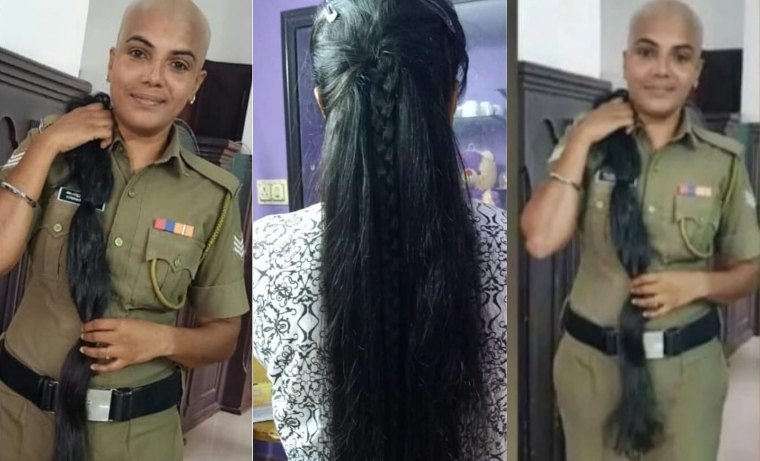 Kochi: In a noble deed, a 44-year old Kerala woman police officer has donated her impossibly long hair for the cause of cancer patients, with her gesture inspiring many, particularly college-going girls wishing to emulate her.

Senior civil police officer Aparna Lavakumar says she had her head tonsured not for a change but for changing the lives of children fighting cancer.

Aparna tonsured her head at a beauty parlour in Thrissur district two months ago and donated her long tresses to a cancer research centre in Thrissur where wigs for poor cancer patients are made and given free of cost.

She said the wigs made from natural hair are unaffordable for poor cancer patients who are faced with hair loss from radiation or chemotherapy treatment.

The artificial wigs are allergic to many.

"So I decided to give up my hair after seeing a cancer afflicted child in a school who was struggling to cope with the loss of his hair due to chemo treatment," said Aparna, a mother of two.

She took permission from her superiors to shed her 70 -centimetres long hair.

A video of Aparna tonsuring her head was caught on a mobile phone camera by someone in the beauty parlour run by her friend and was widely circulated on the social media.

The police official, who was widowed early, said she chose to shed her hair to change a poor cancer patient's life.

"I am not wealthy. That was the only possible way for me to bring a smile on the faces of poor cancer patients," she added.

The widely circulated video has now inspired many girls to do something for a noble cause, Aparna said on Sunday.

The woman police officer's advice to them is that there is no need to "imitate" her act but do something for the poor and needy.

"I am getting calls from young college going girls.

They are inspired by it. My message to them is that... no need to imitate my act. Do anything possible to help the poor and needy in society," Aparna, who is posted at the all-women police station in Irinjalakkuda in Thrissur, told PTI.

She says her act garnered public attention as she was a police official.

"It is the best job to help poor," says Aparna, who gets invitations from college and school authorities in the neighbourhood to create awareness among girl children on various issues.

Office-bearers of Canserve, a charitable society run by cancer survivors and a group of volunteers in Ernakulam, said they had earlier conducted a campaign for donating hair for cancer patients.

Many girl students had come forward to donate their hair when such a campaign was organised at Ernakulam St Theresa's College in 2016, recalled an office-bearer of Canserve, which is helping cancer patients in their fight against the disease and to spread awareness about cancer.

Ambika Chandrakumar, an office-bearer of the society, said now such a campaign is not organised as making of wigs using natural hair is very expensive.

"But we collect hair of those people who are willing to donate and give it to Amala Cancer Research Centre, Thrissur, where wigs are made for poor patients," she said.