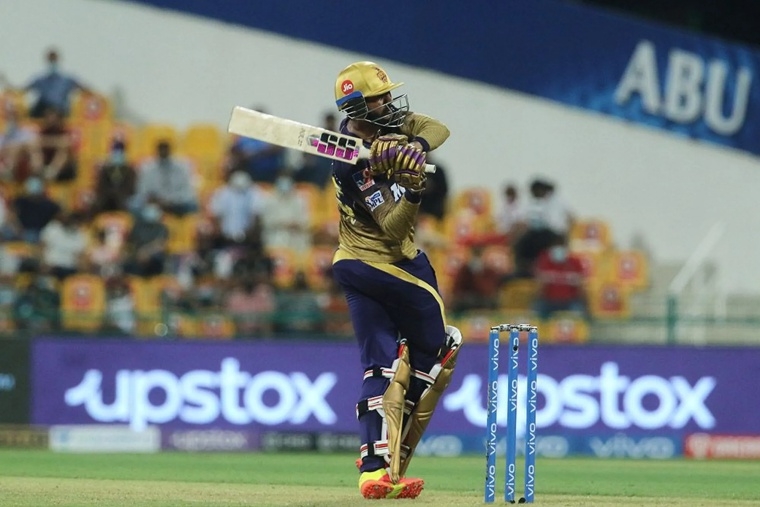 Venkatesh Iyer of Kolkata Knight Riders tries to play a shot during match 34 of the Vivo Indian Premier League between the Mumbai Indians and the Kolkata Knight Riders held at the Sheikh Zayed Stadium, Abu Dhabi in the United Arab Emirates on the 23rd September 2021 Photo by Vipin Pawar / Sportzpics for IPL |

Kolkata Knight Riders' Venkatesh Iyer who made his debut against Virat Kohli led Royal Challengers Bangalore has continued his stellar form in IPL. Today, he smashed his maiden fifty against Mumbai Indians. The innings was filled with utmost dominance as he started it with a six against Trent Boult. He completed his fifty off just 25 balls that comprised 4 fours and 3 massive sixes.

He was ousted by MI's spinner Jasprit Bumrah. However, Iyer's today's performance on the field again has impressed cricket fans and has taken internet by storm. At one stage, it looked like Iyer would score the fastest fifty in IPL 2021. The youngster had earlier slammed unbeaten 41 runs off just 27 balls against Royal Challengers Bangalore.

Venkatesh Iyer is a serious Talent.
And Rahul Tripathi played an amazing knock.

A big congrats Venkatesh Iyer for first half century in IPL and its come against mighty MI in his second game. 🔥👏🏼
You are different. pic.twitter.com/I5bdhImLCE

KKR making MI struggle so so hard... wanted to watch this since so long! Venkatesh Iyer running between the wickets like he has a train to catch.. a train for KKR to the finals, a train for his career to the International T-20s ! 🔥💜 pic.twitter.com/XnX6KrLFUl

#VenkateshIyer such a delight to watch this guy play !! pic.twitter.com/8RH3RKswly

VENKATESH IYER. What a talented gem KKR has got. 2 fantastic innings in a row. #MIvKKR pic.twitter.com/oqpKxbZGjP

Iyer, who plays for Madhya Pradesh in the domestic circuit, had already made his T20 and 50-overs debuts for the Madhya Pradesh senior team and was captain of the state’s Under-23 team.

In February this year, the opener played scintillating innings of 198 runs against Punjab in the List A tournament Vijay Hazare Trophy. He hit 20 fours and 7 sixes. He scored 273 runs in five matches of the tournament. During this, his strike rate was 124, while the average was 55.