Sneha Dubey is First Secretary in India's UN Mission, who cleared the UPSC exam right at her first try in 2012 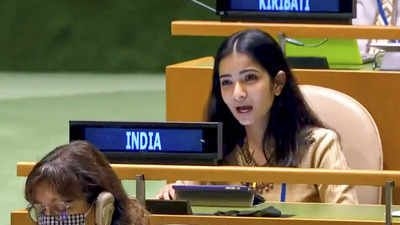 The reply given by Sneha Dubey, a First Secretary in India's UN Mission, to Pakistan Prime Minister Imran Khan's misinformation over Kashmir in the UN General Assembly (UNGA), has become the talk of the Twitterverse.

Following the Pakistan PM Imran's address, India claimed that Khan is misusing the international platform by bringing up matters of India's internal interest, which was not necessary.

Dubey in her speech said, "The Union Territories of Jammu and Kashmir and Ladakh were, are, and will remain an integral and inseparable part of India. This includes those areas which are under illegal occupation of Pakistan. We call upon Pakistan to immediately vacate all areas under its illegal occupation.

"Member countries are aware that Pakistan has a history of harboring, aiding, and actively supporting terrorists. It is a country that has been recognized globally as a state policy of supporting, training, financing, and arming terrorists. Along with this, Pakistan also holds the outrageous record of hosting the largest number of terrorists banned by the United Nations Security Council".

Have a look at the complete video:

Who is Sneha Dubey?

Sneha Dubey, First Secretary in India's UN Mission, cleared the UPSC exam right at her first try in 2012, after which she joined the Foreign Ministry. In 2014, she was sent to the Indian Embassy in Madrid. Sneha's father works for a multinational corporation, while her mother teaches in a public school. Sneha is also the first member from her family to join government services.

According to media reports, Sneha is an IFS officer from the 2012 batch who earned her MPhil from the School of International Studies at Jawaharlal Nehru University in Delhi.

Have a look at how netizens have reacted to the young Indian Secretary's speech at the UN:

It took us 10 odd years to vome to this position when it should have been done way before, better late than never, kudos to #SnehaDubey she killed it https://t.co/OFucRlqz5E

" An Arsonist disguising itself as a firefighter "
- Sneha Dubey.👏👌🔥

what a suitable and concrete reply. 👏👏👏👏

What a powerful presentation and fierce rebuttal of Pakistan 😇.
Go girl go #SnehaDubey #UNGA
Proud of the youngsters of the country, #BharatMata is in safe hands now. ❤️🙏 pic.twitter.com/YM84sc0YhV

A woman with fierce voice against the Wrong for the country and country people #SnehaDubey .
What's more beautiful than this ?
Show me !#SnehaDubey #slamspakistan pic.twitter.com/xiuAyFVrJA

Wow! Just Bang on. She had nailed it and made the nation proud. #SnehaDubey #UNGA https://t.co/MOYANrk7Cz

Message is clear. This is New India 🇮🇳💪#SnehaDubey u nailed it girl ❤️ pic.twitter.com/s3LdqbTstf Watch video: 'Arsonist disguising as a firefighter', says India in reply to Pakistan PM's tirade at...