Monkey business: Police officials at Uttarakhand ITBP Camp dress up as bears to scare away primates

A video of the incident has since gone viral.
FPJ Web Desk 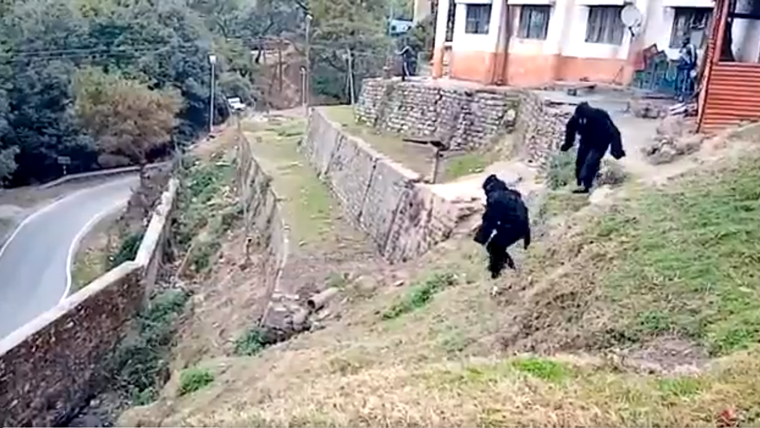 What is the best way to counter mischievous monkeys at an ITBP Camp in Uttarakhand? Why by dressing up as their bigger and badder cousin, the bear of course!

The video of their rather unique face-off against the primates has since gone viral. In the video the two police officers in their dark shaggy suits can be seen making their way carefully down a slope next to the road as the monkeys scamper away as fast as possible. They don't even stop at the road, crossing over and disappearing into the trees on the other side.

The 'bears' patrol the area briefly before retreating. Towards the end of the video a lone monkey can be seen surreptitiously moving along the far side of the road.

While netizens were enthralled and amused by the antics of the officials, it would appear that donning costumes to frighten monkeys is not a new idea.

In Gujarat, airport officials at the Sardar Vallabhai Patel International Airport have been spotted sprinting full tilt in pursuit of langoors. A chase video posted by ANI shows a man in a bear costume (similar to the one above) running, presumably in pursuit of a langoor, or several.

The concept has also been used by villagers in Uttar Pradesh's Shahjahanpur district. Reportedly, people there have dressed up as bears to combat the monkey menace. They take turns with the costumes.