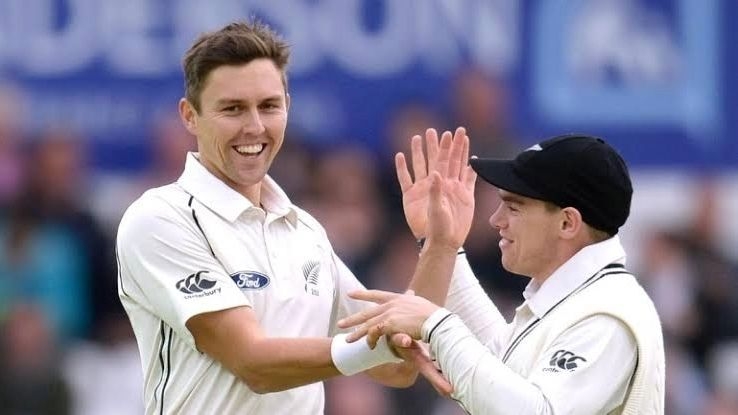 Christchurch: New Zealand left-arm pacer Trent Boult on Monday achieved the distinguished milestone of claiming 300 wickets in Test cricket. Boult achieved the milestone while picking 5/43 in 13.2 overs on day two of the second Test against Bangladesh at the Hagley Oval.

Cricket fans took to Twitter to celebrate the pacer's special milestone. Scores of users poured in their wishes and congratulated Boult for entering the exclusive 300 Test wicket club .

Trent Boult becomes the 4th New Zealand bowler to pick 300 Test wickets. What an achievement by Boult, one of the best from Kiwi land.

Congratulations Trent Boult for completing 300 wickets in Test cricket. It has been a long ride for Boult, a phenomenal bowler over the years in all formats. #NZLvBAN

Congratulations Trent Boult for becoming the 4th Kiwi bowler @BLACKCAPS to 300 Test wickets. People call him "Lovely Trenty" & he's certainly been lovely for us in his career. Well bowled 👏 pic.twitter.com/DrOVXgeCMH

Trent Boult completed 300 wickets in Test cricket - one of the greats from New Zealand cricket.

Trent Boult completed 300 Test Wickets in his Career - One of the Greatest in this Generation. #NZvBAN

Only New Zealander to take a hat trick in WC

One of 6 cricketers to have taken 2 ODI hat tricks

Leading wicket taker by a New Zealander in WC

Only the 4th New Zealander to take 300 Test wickets

Part of NZ team that became no 1 Test and ODI side pic.twitter.com/Lzt0zZNYLk

Taking out Mehidy Hasan Miraz meant Boult scalped his 300th wicket in Test cricket. Apart from Mehidy, Boult took out Shadman Islam, Najmul Hossain Shanto, Liton Das and Shoriful Islam to complete his ninth five-wicket haul in Test cricket as Bangladesh were bowled out for 126 and conceded a lead of 395 runs to the hosts at stumps on day two. NZ vs BAN: 'One group must stand up; why not this group?' Director Khaled Mahmud hopes Bangladesh...