Lost dog from Hampshire reunites with owner, rescuers tied favourite snack on drone to spot it

A dog in Hampshire was rescued from rising tides with the favourite snack of the canine tied with bootlaces to a drone in the search operation.

The Jack Russell terrier, identified as Millie, had gone missing after coming loose from her lead in Havant, The Guardian reported. Millie was spotted stranded on mudflats near Portsmouth, as rising tides scared to sweep her off sea, no sooner rescue effort swing into action.

According to reports, the thoughtful idea to rescue Millie was of volunteers with Denmead Drone Search and Rescue DDSAR, who got aware of the lost dog's fondness for bangers two days down the search.

As guessed, the hungry and craving Millie got tempted to bite the drone attached sausage via sniffing that out. Eventually, making herself to get rescued! However, the pet seemed frightened to cross muddy marshes and reach the rescuers.

Elliot Exton, of the DDSAR, as quoted by The Sun said, “We had two teams in a kayak try to go out to see where Millie was after we’d had a sighting. We came up with the idea to hang sausages on the drone to lure her towards the team, as it was high tide and we didn’t want to risk her drowning."

Millie’s owner Emma Oakes raised the alarm on Saturday after her pet vanished and the police, coastguards and DDSAR answered her call. She was especially worried as her beloved pet had been seen running near major roads close to Farlington Marshes near Portsmouth, The Sun reported. Emma thanked the volunteers who helped look for Millie, singling out the “fantastic” drone team for their inventive rescue ideas. 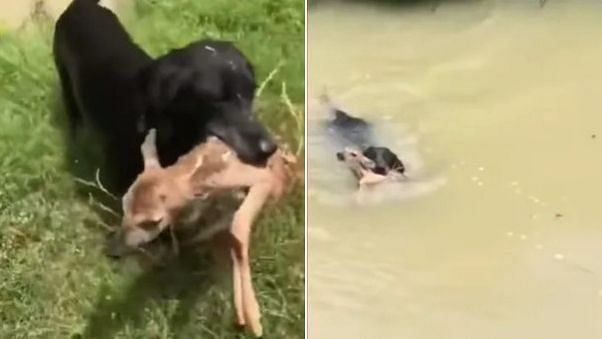 HomeViralLost dog from Hampshire reunites with owner, rescuers tied favourite snack on drone to spot it