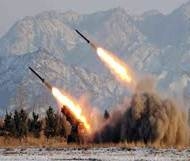 New Delhi: India today strongly condemned renewed missile attacks targeting civilian areas in Riyadh and other cities of Saudi Arabia, and reiterated its resolve to fight terrorism and violence in all its forms. According to Saudi authorities, one person was killed after seven missiles were fired from Yemen by Iranian-backed Houthi rebels on Sunday.

“We strongly condemn the renewed missile attacks targeting civilian areas in the direction of Riyadh and other cities of Saudi Arabia. We are deeply concerned about the escalating situation threatening the lives of innocent civilians. We reiterate our resolve to fight terrorism and violence in all its forms,” the External Affairs Ministry spokesperson said.

The missiles were fired at four targets, including the capital city of Riyadh, and all were intercepted and destroyed, said spokesman of the Saudi coalition forces for supporting the legitimacy in Yemen Colonel Turki Al-Malki in a statement yesterday. Fragments from the intercepted missiles killed an Egyptian resident, the statement added.