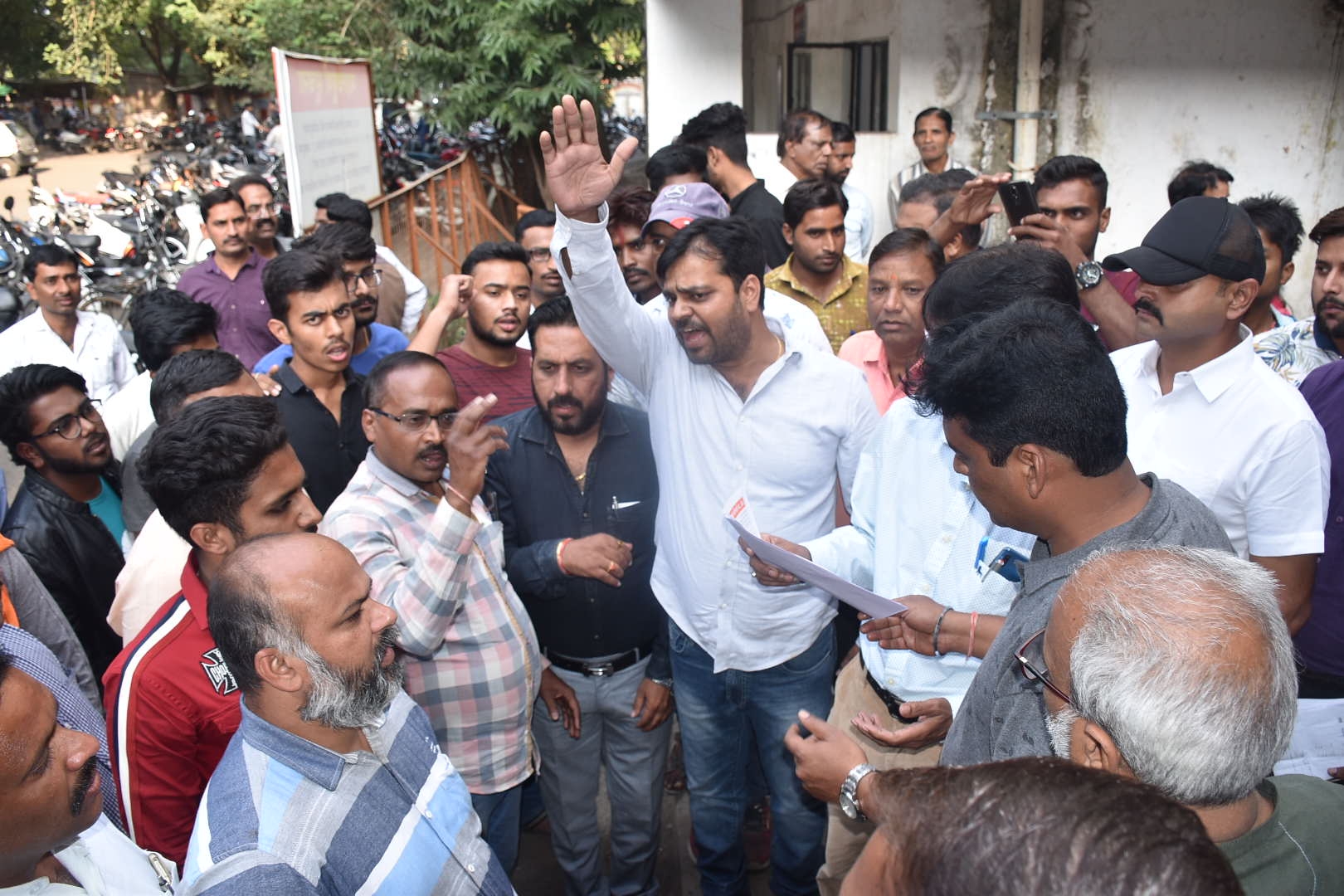 Ujjain: The untimely death of two trainee patwaris Rituraj Singh and Amit Mishra, who died in a road mishap (crushed by a private passenger bus) near Tapobhumi on Indore Road recently, has evoked sharp reaction of the society at large. On Saturday, demonstrations were held to press the demand of booking the culprits under murder charge. Demands were also made to give adequate compensation to kin of the deceased persons.

Karni Sena stages demo at Police Control Room: Anguished over the death of trainee patwaris, the members of Rashtriya Rajput Karni Sena held a demonstration at Police Control Room. Amid sloganeering a memorandum under the leadership of Sena’s state organising secretary Shailendra Singh Jhala and district president Jairaj Singh Lakhaheda was handed over to ASP Rupesh Dwivedi. It was demanded that an offence under Section 302 and 120 (B) of IPC should be registered against the bus driver, cleaner and owner. It was also warned that if the demand is not met within a week, the Sena will launch a massive agitation in the district and may also gherao the CM’s bungalow.

BJYM workers demonstrate at RTO office: Dozens of BJYM workers, agitated by the death of two trainee patwaris, demonstrated at the RTO office and demanded strict action against the culprits. Along with the demand for action under the leadership of former state minister Bhanupratap Singh Bhadauria, the BJYM workers gave suggestions for preventing accidents. BJYM leader Vikas Khatri said that the Regional Transport Officer was handed a memorandum regarding road accidents on the major roads along the Indore Road. The memorandum demanded that no new permit be given by the RTO and the permits of the bus owners who are violating the rules should be canceled. Periodic inspection of the driver should be done by surprise inspection to see if there is any kind of intoxication. If possible, strict action should be taken against the bus owner as bus owners also have moral responsibility.

Compensation sought: Strongly condemning the incident, Vishwa Hindu Mahasangh president Devendra Shah Lala took the role of RTO cross handed and demanded the collector to immediately cancel the permits of all those heavy vehicles which are continuously violating the rules and regulations. He also demanded that the kin of the deceased patwaris should be given an ex-gratia of Rs 20 lakh each.

Compilation of MV Act could have saved them!