Ujjain: In a heartless incident, a 15- year- old girl was found tied with 15 kg chain in front of district hospital on Monday evening. The girl was tied with chain by her father as she refused to work in fields. Police booked the victim’s father under Section 23 of Juveniles Act. 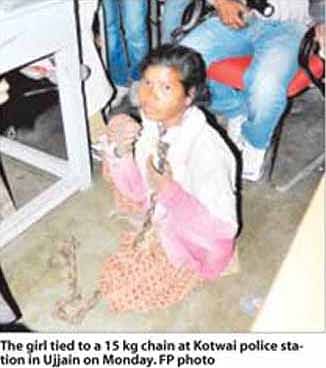 Passersby saw the minor girl whose neck was tied to a 15- kg iron chain and immediately informed the police. Police reached at the spot and took the girl to Kotwali police station and removed the chian.On being asked, the girl narrated her plight to the police.

The girl said that she was tied with the chain by her father who forced her to work in the fields. She is the youngest in the seven- member family. Her sisters are married and her father forcefully sent her to work for money. She also told that her father was a drunkard.

When she refused to work in the fields, her father tied her up with an iron chain for a month inside the house. She escaped from her home at village Piplia near Makdon town in Tarana tehsil and arrived in the city in a bus.

The girl is illiterate as she was not let to go school by her father.The girl is stated to be mentally sound but is ill as she became victim of malnutrition due to unavailability of balanced diet. Kotwali TI Rakesh Mohan Shukla told Free Press that a team of police was sent to the village to investigate the case. A case has been registered against the girl’s father under Section 23 of Juvenile’s Act.