Member of Parliament Anil Firojia has extended support to the residents of the area and demanded strict action against the concerned officials along with compensation.
FP News Service 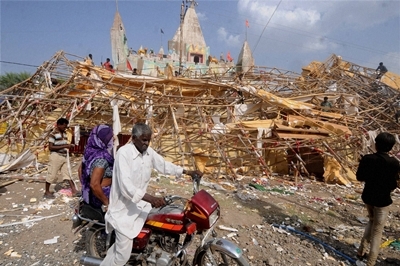 Ujjain (Madhya Pradesh): Colonisers who developed colonies in the Simhastha Fair area post-2016 are in deep trouble as the administration is all set to not only demolish their residence, but also make them refund the money back to their customers.

Member of Parliament Anil Firojia has extended support to the residents of the area and demanded strict action against the concerned officials along with compensation.

He told media persons on Saturday that all encroached Simhastha Fair land will be freed and government employees who have encouraged such illegal activities will not be spared.

The highest number of illegal constructions in the Simhastha Fair area has taken place in Ankapaat, Khilchipur and Garhkalika. In Ankapaat, Mangal Colony has been developed on an 80-feet-road at Simhastha area. The settlement of the colony here will make it difficult to construct a road.

According to the administrative sources, collector Asheesh Singh maintains that the common man should not bear the brunt of the coloniser’s mistake. He is working on a plan to ensure that the plot holders get a refund. He is also mulling action under the National Security Act will also be considered against the concerned coloniser, said a source. The residence of two such colonisers has been demolished.