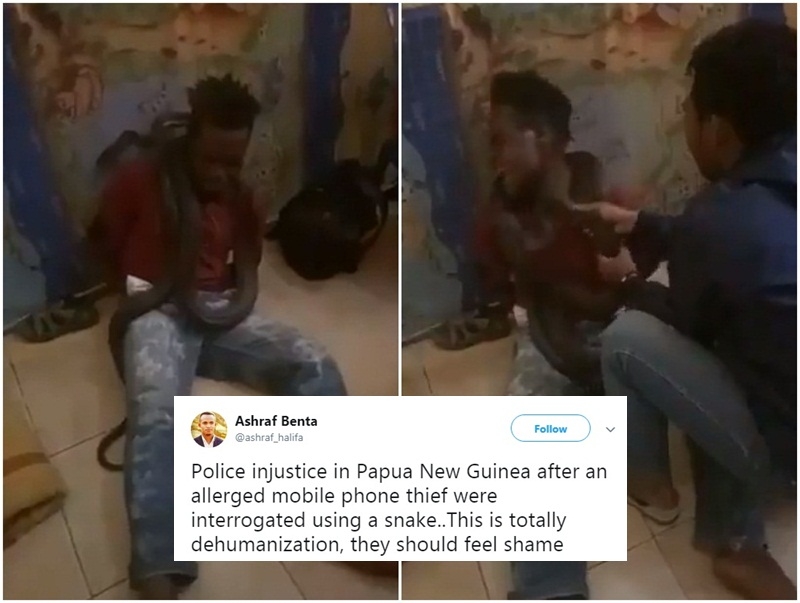 Recently, a video created an uproar online which showed Indonesian police using live snakes to interrogate their suspect. The video which is now viral online forced people to raise question about the police’s interrogation methods in Indonesia’s Papua region.

In the video, a policeman can be seen torturing a suspect accused for stealing mobile phones. The handcuffed man can be seen screaming as the policeman threatens to put the snake in his mouth and trousers. However, few seconds later the policeman puts a lot of snakes on the accused man’s body.

The video was posted by an activist named Veronica Koman on her Twitter page, and has met with a lot of support from the Indonesian community. Recently, Veronica updated the community by posting, “The Papua Regional Police official apologized to the Jayawijaya community for the actions of police officers who interrogated a thief using a large snake.”

Police also added that the snakes which were used to torture the suspect were not venomous. However, that didn’t end the outrage. Many on social media are still accusing the policeman for his act.

Here are some tweets

Here is a video of a Papuan detainee harrassed by your Indonesian police. They made use of a snake to terrorize this suspect.
What kind of justice are you promoting in your country, Pres. Widodo?
This is too cruel.😭😖👎 https://t.co/ZJ31sl9jEk

Police injustice in Papua New Guinea after an allerged mobile phone thief were interrogated using a snake..This is totally dehumanization, they should feel shame https://t.co/iydcOsAOU7