Kashmiri wazwan: Feast of the valley 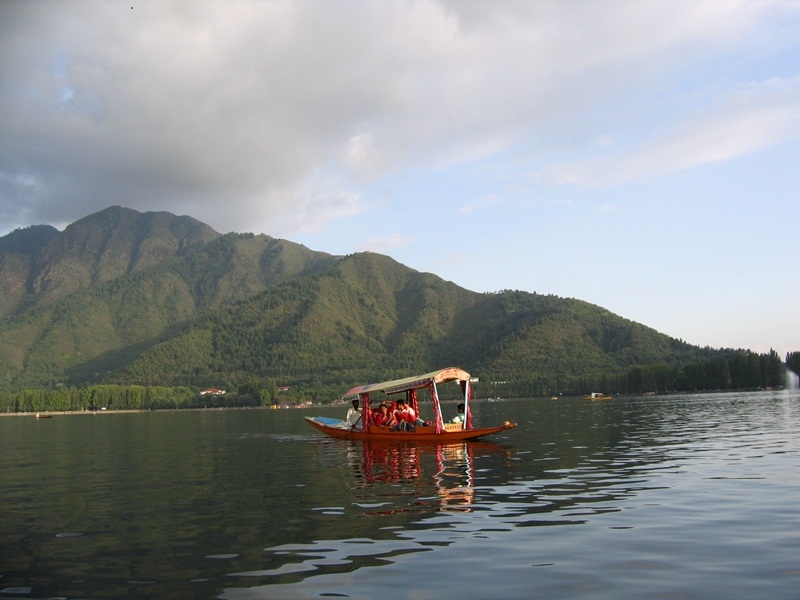 Replete with its own set of customs and unique dishes, the Kashmiri wazwan is an elaborate, multi-course feast that no important celebration in the beautiful valley can ever be complete without, discovers RAUL DIAS.

It is said that Kashmir is a land of extremes where nothing is done in half measure. The intensity of Mother Nature is at its brilliant best with powdery snow-capped winters giving way to mind-numbingly beautiful springs. The latter, bringing with it the heady, intermingling fragrance of pine and cedar and montages of velvety green grass-covered meadows with frolicking sheep. Add to that cascading waterfalls and the glass-like surface of the Dal Lake, replete with gently gliding shikaras, and you have all the makings of one of the most visually stunning places on earth.

But there is one more, very important aspect that augments this reality of Kashmir being a virtual paradise on earth — the wazwan! A gourmand’s fantasy come true, this elaborate multi-course ‘foodstravaganza’ is a must at any major celebration in the valley. In fact, it is said that come marriage season, it is the availability of the vaste waza or master chef that determines the wedding date and nothing else. 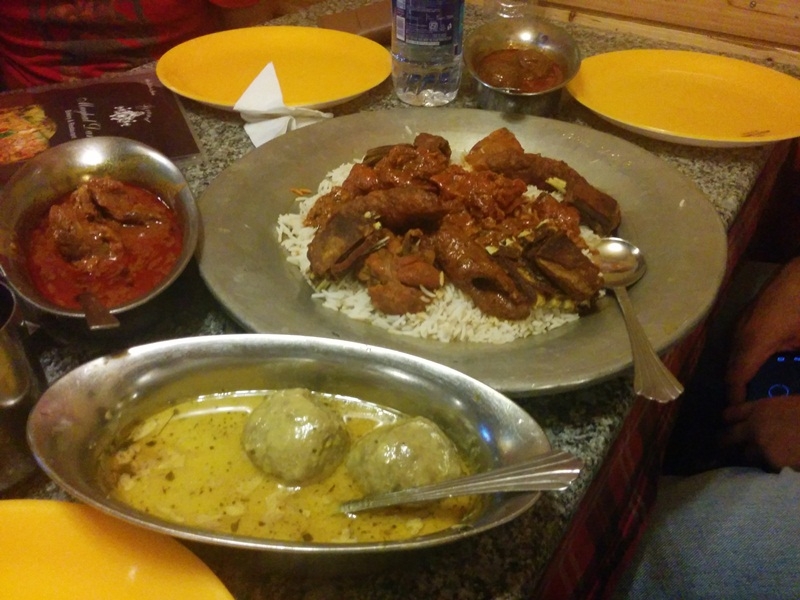 A portmanteau of the words waza for the chef and wan meaning spread, the wazwan has its own set of rules which are strictly followed. For one, it can have anywhere from seven to 30 dishes, served in a particular sequence and can take anywhere from three to five hours to go through, often lasting well into the whole night. Second and most importantly, a wazwan is an almost-entirely carnivorous affair, where lamb is at the centre of all things, though there are a few vegetarian dishes thrown in as peace offerings, but more on those later!

Served on a communal platter called a trammi — for a minimum of four people, all seated on a carpet called a dastarkhwan — the meal cannot begin until each person has washed their hands. This is done tableside in a copper basin called a tash naer. Once cleansed, one can partake in the meat-feast that is like no other. Covered with a domed lid called a sarposh, the trammis are laden with the ‘inaugural’ dishes like the long, minced lamb seekh kabab and the delicately spiced tabak maaz yogurt marinated lamb ribs – all served over white rice. Other dishes include the roast leg of lamb called daeni phoul and the waze kokur roast chicken that’s garnished with chopped coriander and melon seeds.

Mains are a procession of elaborate lamb gravy dishes like the pounded meatballs in a red sauce called rista, the yogurt and coriander rich daniwal korma and the famous roganjosh (rogan is oil and josh is heat) that gets its intense red colour from the typically Kashmiri cockscomb flower called mawal. Other less-spicy dishes also form part of the main course and chief among these is the totally spice-bereft aab gosh that sees sheep ribs simmered in a milk-based gravy that’s flavoured with just saffron and green cardamom.

Always served at the end of the wazwan is its crowning glory, the ghustaba. Similar to the rista, in that, here too lamb meat and fat pieces are pounded together with a wooden mallet over a flat stone to form round balls. But the gravy called a yakhni in a ghustaba is totally different made from yogurt and aromatic spices. 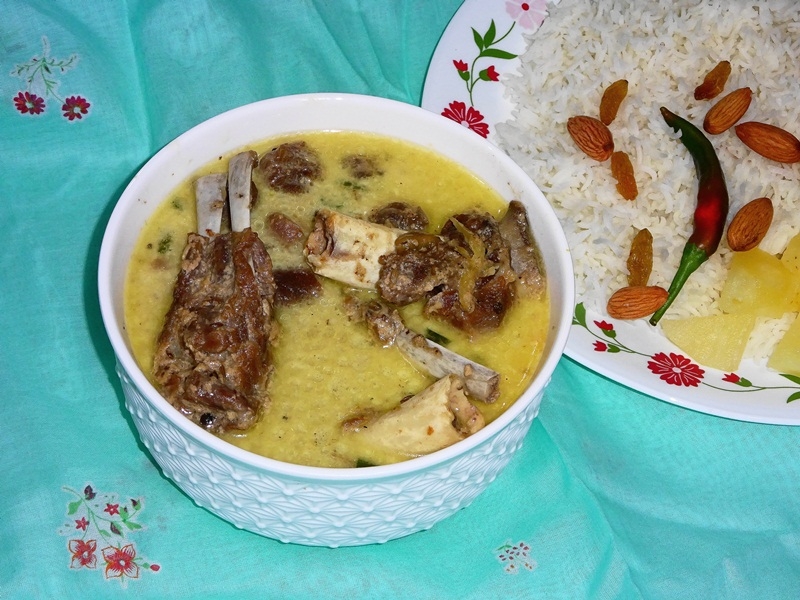 Before one accuses the waza of totally neglecting the vegetarians, he makes sure to send out a modest number of veggie dishes. Speaking of yakhni, the vegetarian version sees lotus stem called nadru standing in for the meatballs. Cooked in a rather pungent mustard oil-based gravy, similar to spinach, monji haak is chopped collard greens spiced with the de rigueur Kashmiri red chillies.

Another must-have in the veg section is the ruwangan chhaman. Here, cottage cheese called chhaman in Kashmiri is simmered in tomato sauce and flavoured with spices and saunf (fennel seeds) for a fragrant, yet delicate taste. Besides the aforementioned white rice, a wazwan can also include another rice preparation that takes the form of the sweet and nutty pulao that’s studded with nuts, dried fruits like apricots, flavoured with saffron and garnished with fried onions. 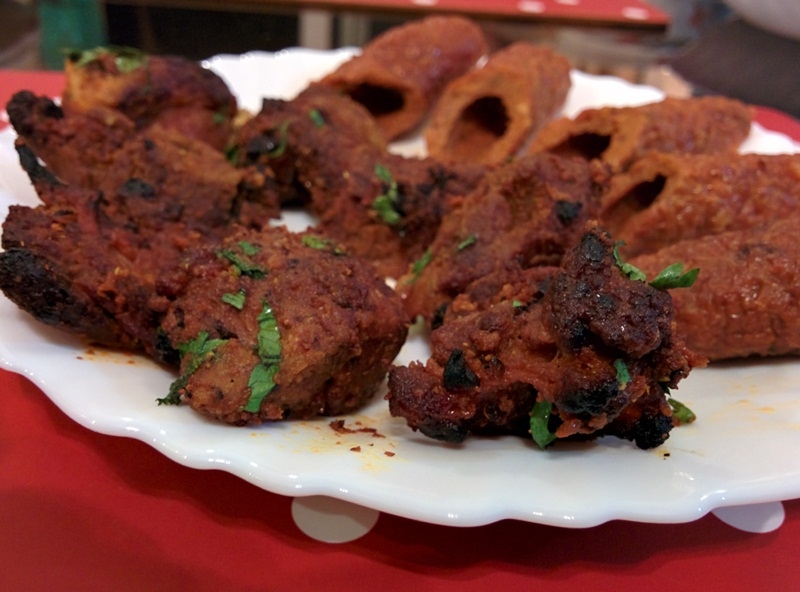 Besides bowls of crisp tomato-cucumber-onion salad and earthen pots of cooling yogurt, the main wazwan sees a virtual procession of differently flavoured chutneys as accompaniments. Prime among these is doon chetin or walnut chutney made with the valley’s favourite nut, yogurt and chillies. Made with sliced onions that are soaked in vinegar and flavoured with dried mint leaves and red chilli powder, the supremely spicy gande chetin is another must-have.

On the contrary, the sweet mesheid al or pumpkin chutney is made with yogurt and other mild ingredients like pumpkin, dates, cardamom and nuts to which a dash of honey is added. Also popular is the muji chetin that is a melange of just two ingredients: radish and yoghurt, with the former believed to be good for health and for having a cooling effect on the stomach after the excesses of the wazwan. Interestingly, not many desserts form part of the wazwan with just the kaung phirin made from semolina and thickened sweet milk stepping in for a sweet, simple and suitable ending!

One of the most perfect and soothing ways to draw a close to an elaborate…and yes, calorific wazwan is by sitting down, legs stretched et al for a cup of the refreshing, typically Kashmiri tea preparation called kahwa. Prepared the traditional way, kahwa is made from green tea that is steeped in warm water to which strands of fragrant saffron, green cardamom, cinnamon and thin slivers of almonds are added. Served from an intricately decorated brass spouted kettle called a samovar, kahwa is always had without any milk, sweetened with a dash of honey.