Cambodia: A haven of architectural marvels 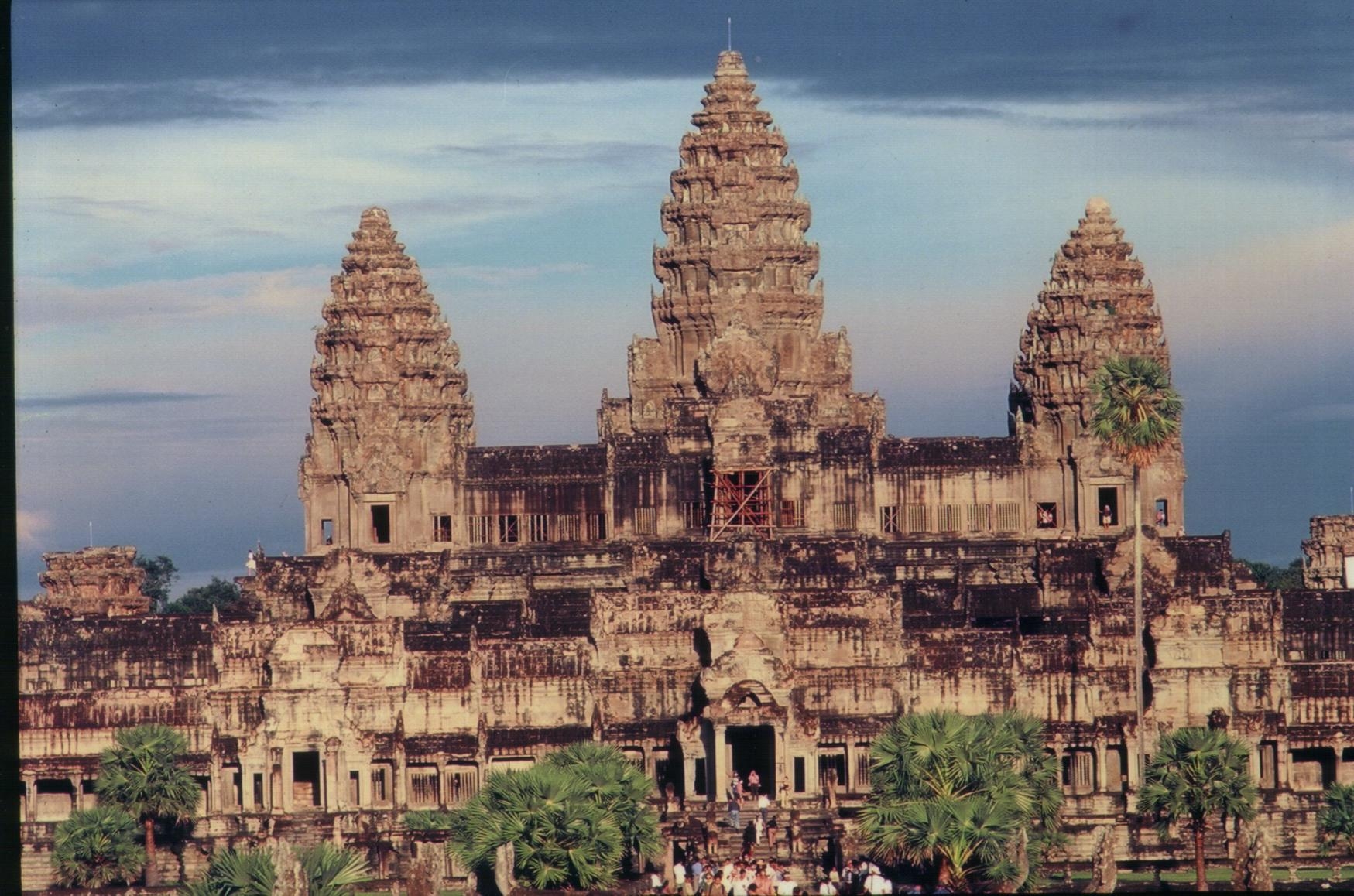 Anand & Madhura Katti are transfixed with the several historic buildings in Cambodia.

An imposing eight-armed statue of God Vishnu at the National Museum in Phnom Penh, the capital of Cambodia, depicted the influence of Hinduism on this small, beautiful South East Asian country. The sixth century statue is one of many such Hindu idols and artifacts from Angkor Era that are exhibited at the Museum along with antiques from other periods such as Funan and Chenla dynasties.

Cambodia lies at the heart of Indochina, bordered by Thailand to the West, Laos and Thailand to the north and Vietnam to the east. Its uniquely Khmer culture makes it a fascinating country despite its tiny size compared to its popular neighbors. Its cultural traditions and dominant influences stem from the Indian subcontinent.

Khmer empire dominated the cultural heartland of South East Asia during the historic Angkorian period that lasted for five centuries during early second millennium. Thailand, Vietnam and Laos were under its rule then and Khmer’s supremacy can be assessed by the vestiges of the grand Angkor Wat. The temple spread on acres, is said to have been built by the rulers of a kingdom that came from India. 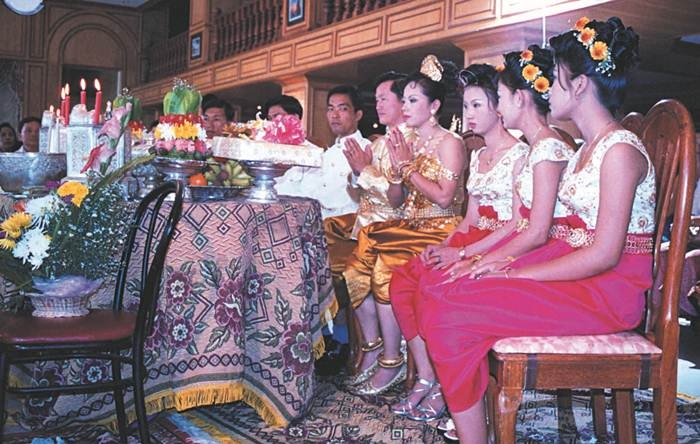 The capital of Cambodia, Phnom Penh is situated at the confluence of three rivers- the Mekong, Tonle Sap and Bassac. Recent growth in tourism has given rise to many new hotels and restaurants.  While in Phnom Penh you can visit the palaces of former rulers of Cambodia, National Museum and numerous Buddhist temples or wats.

The official residence of King Norodom Sihanouk and many other buildings in Phnom Penh are decorated in the Khmer architectural style. They also depict Hindu motifs like the Garuda and Hindu mythical symbolic bird.

The Palace complex houses the Royal Residence, the Throne Hall, The Silver Pagoda, Shiva Temple and other buildings. The silver pagoda displays priceless historical objects. It draws its name from the 5329 silver tiles (each weighing more than a kilogram) that cover the floor of the Vihar. The temple’s deity, Emerald Buddha is a cultural treasure. In front of the dais stands a life-size gold Buddha weighing 90 kg. It is decorated with 9584 diamonds, the largest of which is 25 carats. There are many other Buddha statues along with royal objects. The Royal gold costume, costumes of the Brahmins that performed daily chores and offerings to the temple deity and the royal throne are of special interest.

Wat Phnom is one of the capital’s major landmarks. A small hill crowned by an active Wat (temple) marks the legendary founding place of Phnom Penh. 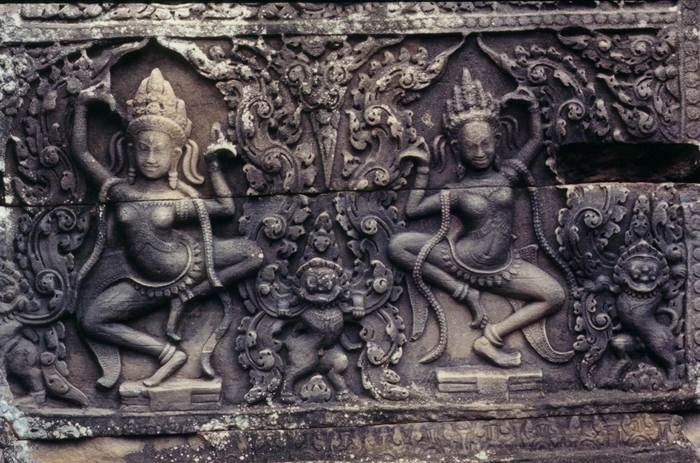 Legend has it that Lady Penh had fished a floating Koki tree out of the river in late 14th century. Inside the tree were four Buddha statues. She built a hill (‘Phnom’ meaning hill in Khmer) and a small temple (Wat). Thus Wat Phnom came into existence and the surrounding area came to be known as Phnom (hill) Penh (the creator of the temple). The large stupa contains the remains of King Ponhea Yat, who moved the Khmer capital from Angkor to Phnom Penh in 15th century.

Two huge Naga heads welcome you from each side of the stairs. The temple walls inside are decorated with murals and paintings depicting stories from the Indian epic Mahabharata. The hill is the site of constant activity, with a steady stream of visitors trekking to the top and a constellation of vendors and motodup (motorcycle taxi) at the bottom. Monkeys live in the trees around the hill and elephant rides are a popular Sunday event.

We noticed that Naga or the snake god has a great significance in Khmer’s lives. The Independence Monument in the city square is built with hundred Nagas. The monument, built in 1958 to celebrate Cambodia’s independence from foreign rule, also serves as a memorial to Cambodia’s war dead. In the evenings, the Independence monument is brilliantly illuminated by red, blue and white flood lights.

Phnom is the gateway to Siem Reap, the ancient City which is known for its magnificent temple- Angkor Wat. Siem Reap is 5 hours boat ride away or a 45 minute flight away from Phnom Penh.

At Angkor, the old capital of the Khmer kingdoms of Cambodia, is a home to Hindu and Buddhist temple complexes, 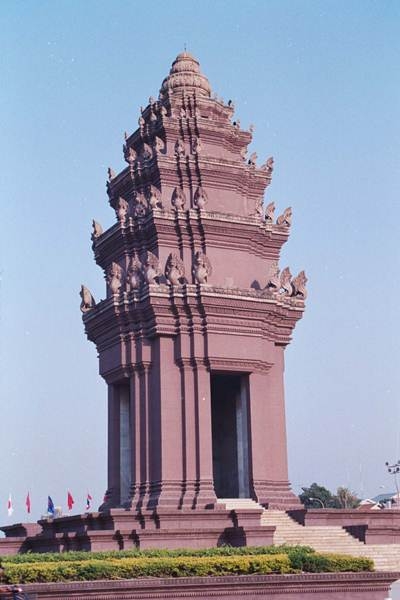 Each Khmer king built his own temple with himself depicted as the deity, something similar to the Hindu concept of the god-king. Hinduism flourished alongside Buddhism from the 1st century until the 14th century. Angkor Wat was built under King Suryavarman II, who reigned in early twelfth century. He intended the temple to present him as the incarnation of Vishnu. In Funan and during pre-Angkorian period, Hinduism was represented by the worship of Harihara. During the time of Angkor, Shiva was the deity most in favour with the royal family and in 12th century, Vishnu came into prominence.

Getting There: One can take Air India or Cathay Pacific up to Hong Kong and onwards take Dragon Air up to Phnom Penh. One can also fly through Bangkok.

Visa: – Cambodian visa can be obtained upon arrival.