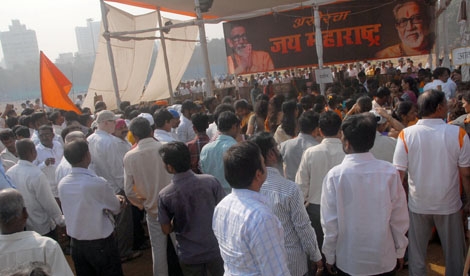 Mumbai : Sensing the possibility of the removal of the makeshift memorial of their beloved Balasaheb by the Brihanmumbai Municipal Corporation (BMC) administration, around 700 Shiv Sainiks gathered at Shivaji Park on Saturday to prevent any such development.

Since early morning, Shiv Sena supporters started gathered at Shivaji Park in an attempt to oppose the possible removal of the temporary cremation structure by the BMC administration.

Shiv Sena spokesperson and Member of Parliament Sanjay Raut said that it is matter of people’s sentiment and the government must consider their demands.

“Any government or any law can’t disobey the people’s sentiments. If people are wishing to build a memorial for their beloved leader, then neither government nor BMC can do something against our will,” said Raut.

The BMC had sent a notice to BMC Mayor and Sanjay Raut for removal of the temporary structure, which has become a place of pilgrimage with hundreds visiting it every day.

“The permission given for funeral at Shivaji Park was conditional. The fact that notices have been issued to the Mayor and Shiv Sena MP Sanjay Raut to remove the make-shift memorial means that the process of action is on,” Chavan said.

Chavan had also said that the state government would not do anything in violation of the law with regard to Sena’s demand to set up a memorial at the spot, as the matter with regard to Shivaji Park, which has been declared as a silence zone, is pending in the High Court.

While the government is of the view that it is a recreation ground, the court says it is a playground in which case no construction will be possible, he had said.