Puppet CM to hold the fort for Amma 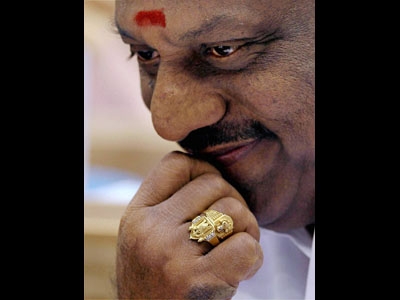 In all probability, 2014 will go down in the political history of India as the year of fame and power for the tea sellers.

If the Himalayan 2G spectrum and coal scams of the UPA Government catapulted ‘tea boy’ Narendra Modi to the Prime Ministerial throne in May, the conviction and consequent unseating of AIADMK leader J Jayalalithaa as Chief Minister of Tamil Nadu on Saturday has led to the anointment of another former tea stall owner O Panneerselvam as her successor for a second time in 13 years.

On Sunday evening, legislators of the AIADMK, under instructions from Jayalalithaa, who is presently lodged in a Bangalore jail, unanimously elected Panneerselvam, who until Saturday was the Finance Minister, as the leader of their legislative party. This will be the second time Panneerselvam will be stepping in as a “stop gap” Chief Minister following Jayalalithaa’s conviction.

A man with a humble personality in public, the khadi shirt and dhoti clad ever-smiling Panneerselvam, who sports a vermillion dotted tilak on his forehead, was a low-profile AIADMK worker from a picturesque village in Theni district in southern Tamil Nadu until 2001. Although he holds an Economics degree, he had started off his career as a tea stall owner and his first electoral success was in 1996 when he was elected Chairman of the Periyakulam Municipality.

Hailing from the backward Mudukalathur community, he had established a rapport with Jayalalithaa’s friend Sasikala’s nephew TTV Dinakaran and won the Assembly elections in May 2001 and was made the Revenue Minister. Not many knew Panneerselvam but he shot into national centre stage on the night of September 21, 2001 when Jayalalithaa after being unseated by the Supreme Court due to her conviction in a corruption case (since acquitted), named him the Chief Minister.

He held the hot seat for a little over five months and willingly gave it up on March 1, 2002 to facilitate Jayalalithaa’s return following her acquittal. Since then he was hailed as “Mr Loyal” and “Mr Faithful”. Jayalalithaa rewarded him with the Number 2 position in the Cabinet and gave him the powerful portfolio of Public Works Department. There has been no looking back for him and he managed to be the mercurial AIADMK leader’s trusted lieutenant.

In her next term as Chief Minister in 2011, Jayalalithaa made him the Finance Minister. Of late, he was the “go between” for Ministers who wanted to convey something to her and he is one of the very few to have retained their portfolio surviving innumerable cabinet reshuffles.

On Saturday too, Jayalalithaa who was taken aback by her conviction, conferred with Panneerselvam twice outside the Bangalore special court during breaks. A day later, she set to rest speculations that she would appoint someone else as her successor and reposed faith in Panneerselvam, who has never once evinced interest in being projected as former Chief Minister all these years.

Soon after getting his leader’s blessings, Panneerselvam returned to Chennai by road on Sunday. In the late afternoon, AIADMK MLAs, some of them in tears, trickled into the party office and in no time he was elected leader. Thereafter Panneerselvam drove to Governor Rosaiah’s office and submitted the letter of election.

Since with Jayalalithaa’s conviction, technically there ceased to be a cabinet in Tamil Nadu in the past 24 hours, the Governor in a short note described Panneerselvam as the treasurer of AIADMK and MLA from Bodinayakanur and invited him to form the Government.

He is expected to be sworn in on Monday.

However, while on record Panneerselvam will be the Chief Minister of the State, for all practical purposes he will only be a figurehead and is expected to turn to Jayalalithaa for decision-making. Jayalalithaa’s former adviser Sheela Balakrishnan, who was rumoured to be in the reckoning for succeeding her, is also expected to play a crucial role in handling the day-to-day governance.