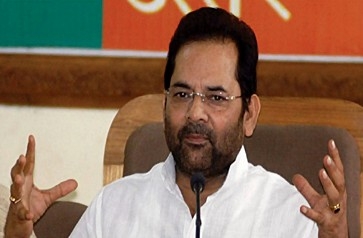 New Delhi: The government's decisive move on Article 370 has cleared the path for solving 370 problems of Jammu and Kashmir, and Ladakh, Union minister Mukhtar Abbas Naqvi said on Tuesday, asserting that the action will "break the back" of separatists and terrorists who used the special status as a "shield" for their activities.

The Centre has revoked the provisions of Article 370 of the Constitution in Jammu and Kashmir and proposed splitting the state into two Union territories.

Minority Affairs Minister Naqvi said most of the local people were happy with the decision and it was only a handful of politicians who were upset with it.

He said now the Minority Affairs Ministry will play a key role in the development of Jammu and Kashmir and Ladakh, particularly in the education sector.

Naqvi also said now the national minority commission, which had no jurisdiction in J&K due to Article 370, will also be able to take up problems being faced by minorities there.

"Some political families kept exploiting the Kashmiris over the years and used Article 370 to make profits at the expense of the people," Naqvi alleged, in an apparent reference to the Abdullahs and the Muftis.

"With the revocation of Article 370, the path for solving 370 problems of Jammu and Kashmir and Ladakh has been cleared," he told reporters. Naqvi asserted that the government's move had nothing to do with religion or culture and all such rights will be protected.

"This (revocation of provisions of article 370 will break the back of terrorists and separatists. They used to make 370 their shield which will now not be there," he said. "Doing away of Article 370 will clear the way for overall development of Jammu and Kashmir, and Ladakh," Naqvi said.

The nexus of politicians and separatists played with the sentiments of the innocent people and kept pushing them into "poverty, illiteracy, unemployment". Jammu and Kashmir, and Ladakh even after being an integral part of India, was deprived of the constitutional rights that every Indian gets, he said.

Whenever a law was passed by Parliament, it used to be applicable to the whole of India except for Jammu and Kashmir, Naqvi said. The Government of India sent Rs 2 lakh 77 thousand crore from 2004 to 2019 for development of Jammu and Kashmir and its people, but all the money was looted by political families, he alleged.