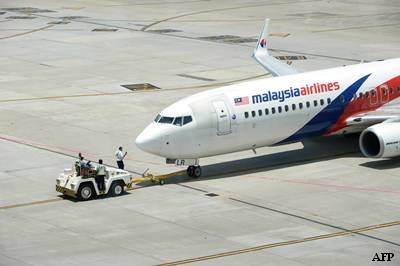 Bangkok: Thai authorities said that one of the country’s satellites spotted 300 floating objects in the southern Indian Ocean even as Australian authorities announced that the search operation for Malaysia Airlines flight MH370 declared “lost” was suspended Thursday due to bad weather.

He also said that the site where the 300 objects were detected was about 2,700 km from Perth, Australia, and about 200 km from the international search area where the ill-fated flight is thought to have come down.

The objects ranged from two to 15 metres in size, he added.

Anond said the images have been handed to Thai caretaker Prime Minister Yingluck Shinawatara and caretaker Foreign Minister Surapong Tohvichakchaikul would forward the findings to the Malaysian authorities for further investigation if these objects belong to flight MH370.

Thaichote is a remote sensing satellite for natural resources’ observation.

Meanwhile, search operations for the lost jet in the southern Indian Ocean were suspended Thursday due to bad weather.

“Today’s (Thursday’s) search operations have been suspended due to bad weather. All planes are returning to Perth & ships are leaving the search area,” the Australian Maritime Safety Authority (AMSA) tweeted.

However, it later added: “Ships staying in search area & will attempt to continue searching but all planes returning. Bad weather expected for next 24 hours.”

Earlier Thursday, the AMSA, which is coordinating the ongoing multinational search operation, said in an update that the search and recovery operations for flight MH370 resumed with six military aircraft, five civil aircraft and five ships in the Australian Search and Rescue Region.

Three objects were spotted Wednesday by two aircraft but these could not be relocated despite several passes. These were unrelated to the credible satellite imagery provided to AMSA.

Malaysia Airlines flight MH370 vanished mysteriously about an hour after taking off from Kuala Lumpur shortly after midnight March 8.

The Boeing 777-200ER was scheduled to land in Beijing the same day. The 226 passengers on board included five Indians, 154 Chinese and 38 Malaysians.

The plane lost contact along with its radar signal when it was flying over the air traffic control area of Vietnam’s Ho Chi Minh City.

“Based on their new analysis, Inmarsat and the AAIB have concluded that MH370 flew along the southern corridor and that its last position was in the middle of the Indian Ocean, west of Perth,” he added.