Opener Sabbhineni Meghana (69) cracked her maiden T20I half-century to power India to 181 for 4 after being invited to bat. Shafali Verma contributed a scratchy 39-ball 46.

Wickets are covered at Sylhet Cricket Stadium as rain interrupts the match between India and Malaysia.  |
Follow us on

With their second successive win in the tournament, India are leading the points table alongside Pakistan, who have also won as many matches as Women in Blue in the event so far.

Chasing a target of 182, Malaysia got off to a bad start as they lost their opener Winifred Duraisingam in the very first over of the match. Duraisingam went back to the pavilion after scoring zero runs as she was dismissed by Deepti Sharma.

Malaysia were 16 for 2, with Deepti Sharma and Gayakwad accounting for a wicket each when the match was called off due to persistent rains. India won the match by 30 runs by the DLS method.

For India, Meghana scored the highest 69 runs while Shafali Verma slammed 46 and Richa Ghosh played an unbeaten knock of 33 runs.

Put to bat first, India got off to a flying start as the openers Sabbhineni Meghana and Shafali Verma slammed Malaysian bowlers all-around the ground and gathered 36 runs in five overs without losing a wicket.

The duo continued carnage on Malaysian bowlers and hammered Ainna Hamizah Hashim for 11 runs in the last over of the powerplay. Meghana, brought in for the rested Smriti Mandhana, slammed a stunning four and brought up her half-century in 37 balls.

Winifred Duraisingam gave her team a much-needed breakthrough as she dismissed well-set batter Meghana. The opener departed after playing a fine inning of 69 in just 53 balls with 11 fours and a six against Malaysia in Asia Cup.

Meghana's wicket invited right-handed batter Richa Ghosh to the crease. In the 16th over of the innings, Ghosh finally shifted gears and hammered Sasha Azmi for 12 runs with teh help of one four and six.

Kiran Navgire then came to the crease but could stand longer as she was departed by Nur Dania Syuhada for zero. Radha Yadav then came to bat and slammed back-to-back two four in the same over of Dania Syuhada.

However, Radha could not continue the carnage on the Malaysian bowlers as she was sent back to the pavilion by Duraisingam after scoring 8 runs in four balls. Dayalan Hemalatha then came to the crease and slammed a six and a four in the final over of the innings to help India post a challenging target of 181/4 in 20 overs. 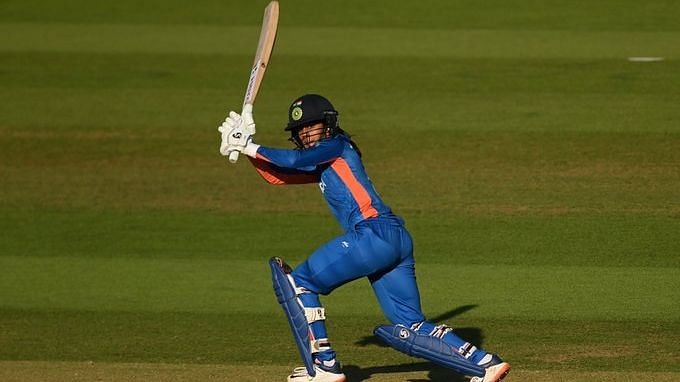