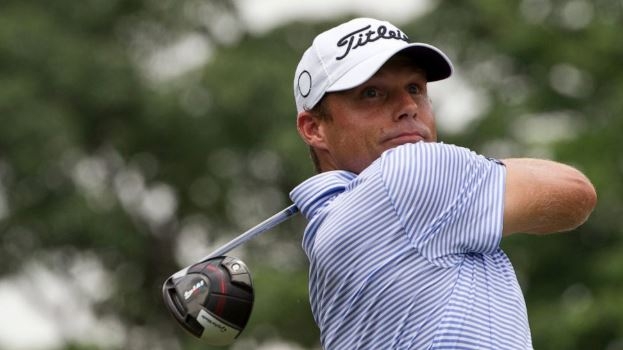 Watney immediately withdrew from the RBC Heritage on Friday and must self-isolate for at least 10 days under the PGA Tour's protocols.

He did not return a telephone call seeking comment. Watney played the opening round with Vaughn Taylor and Luke List, and a rules official notified them at the turn of the positive test.

"I was a little shocked, to be honest," Taylor said.

"Heart started racing, got a little nervous. Just hope Nick is doing well and we get through this."

Watney missed the cut last week in the Charles Schwab Challenge at Colonial in Fort Worth, Texas. He travelled on his own to South Carolina, and his coronavirus test upon arrival at Harbour Town was negative.

Before arriving to the course for his second round, he reported symptoms consistent with COVID-19, the illness caused by the virus. Watney was tested again, and the result came back positive.

Si Woo Kim saw him in passing on the range, and Rory McIlroy said he chatted with Watney on the putting green. McIlroy said they were at a distance, and that Watney sent him a text about the positive result after McIlroy finished his round.

"He was just saying, 'Look, I hope I didn't get too close to you.' He feels badly that he was here today at the golf course," McIlroy said.

"I said to him, 'If I was in your position, I probably would have been here, too. At this point, you just have to concentrate on getting better and getting healthy."

He missed the cut at Hilton Head with a 73.

"It was hard to concentrate out there for me, just thinking about different stuff, and I wasn't playing my best, anyway," List said.

"It would be nice if they had an option - you can kind of say if you want to know or not in a situation like that. I would definitely like to find out after the round next time."

As for another test, List said even if tested, "it might not show up until a few days down the road. So there's a lot of different scenarios."

The tour had no positive tests of the 487 administered at Colonial, and none among the 98 players tested before taking the charter to Hilton Head or the 369 tests for those arriving on their own.

Jordan Spieth, one of four players on the PGA Tour's policy board, didn't sound surprised at golf's first positive test.

"The whole plan put in place was not if, but when somebody tests positive, what's the protocol, and what are the next steps," Spieth said.

"So I feel confident, just in being on those phone calls, in what the PGA Tour is going to do going forward. Hopefully, contact tracing doesn't lead to anybody else testing positive within the bubble."

The tour said in a statement it has started its response plan, which includes those who have had close contact with Watney. It said it would have no further statement.

Taylor, who made the cut with two strokes to spare, said he had no close contact with Watney on Thursday, and he washed his hands immediately after the round.

"Nick never coughed or sneezed, so I feel comfortable," he said.

As part of the contact tracing plan, Taylor, List and their caddies were to be tested immediately.

"If you contract it, that's fine, but then it's the fact that who have you come into contact with, and who you might have exposed and stuff," McIlroy said.

"Look, we're still in the middle of a pandemic. Until this thing's over, we all just have to stay vigilant and keep your distance and wear our masks if we're going out in public and keep washing our hands."

The PGA Tour is scheduled to play next week in Cromwell, Connecticut, where the Travelers Championship is testing everyone - including volunteers and media - who will be on property.

Tournament organisers made that decision. The PGA Tour has tried to create a bubble of its key people at tournaments, designating player hotels as an option and urging everyone in the bubble to avoid outside contact. Some players have been renting houses. There is no regulation if they choose to eat out.

Hilton Head has been particularly busy this week, with local restaurants packed with people who typically come to this quiet island on the Atlantic coast for vacation.

"South Carolina's open. If you go anywhere to a restaurant, there's a lot of people there right now," Spieth said.

"So I guess that's probably best case is that he got it on his own outside" the bubble.

Sebastián Muñoz said "there's just too many people hanging around" the island.

"It's a pandemic, you know? A lot of people get it, and eventually one of us was going to get it," Muñoz said.

"I feel good that we caught early with one guy so far. So hopefully, it doesn't rise up pretty quick."

Under the tour's guidelines for a positive test, Watney is to self-isolate for at least 10 days. He can end his self-isolation after 10 days provided he has no subsequent symptoms or has two negative test results 24 hours apart or more.

The tour will provide a stipend to pay for the costs of his self-isolation.

Watney's most recent victory was in 2012 at Bethpage Black in the FedEx Cup playoff opener. He has struggled to regain his top form since missing 10 months in 2016 because of back surgery.