While it was the first of its kind celebration witnessed in the Indian dugout, this special act was earlier used by the Saurashtra team during the 2018/19 Ranji Trophy tournament.
FPJ Web Desk 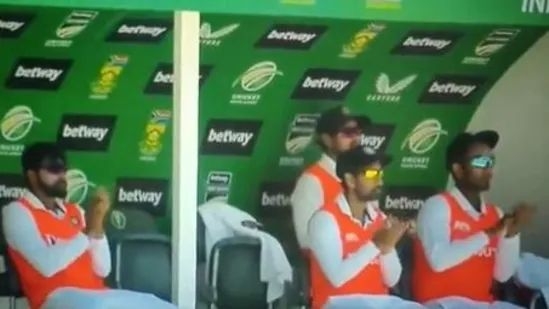 Indian skipper Virat Kohli is known for celebrating hard on field. Be it a win, a personal or team-mate's mile stone or even a wicket, the dashing captain leaves no stone unturned to keep spirits in the Indian camp high and the third Test against South Africa in Cape Town was just another of those instance.

On the second afternoon of the series decider, Proteas suffered a middle-order collapse. However, the duo of Temba Bavuma and Keegan Petersen looked to threaten the Indian side with their steady partnership. Their intension was to bat through the second session and bag the first innings lead, but Mohammed Shami threw cold waters on their plan as he claimed two wickets in just three balls before Jasprit Bumrah got rid of Marco Jansen at the stroke of Tea.

Bavuma walked back to the dressing room first as Kohli completed the dismissal with a low catch at slip, which was also his 100th catch in Test cricket. Two balls later, batter-wicketkeeper Kyle Verreynne edged one to Rishabh Pant. Delighted by India's comeback, Kohli asked the Indian dugout to get behind the team, shouting “Keep clapping boys” and the players obliged to it, clapping in unique synchronised manner.

Kohli celebrates the wickets.. looks towards his team dug out and shouts 'Keep Clapping Boys.. Keep Clapping' and this follows..

This guy just creates an amazing atmosphere in the match.. pic.twitter.com/ens77zqg3M

While it was the first of its kind celebration witnessed in the Indian dugout, this special act was earlier used by the Saurashtra team during the 2018/19 Ranji Trophy tournament.

“It started a couple of years back,” Jaydev Unadkat told ESPNcricinfo. “In a Ranji Trophy game, there aren’t that many spectators in all the games. So you need to create that atmosphere where you feel good about yourself and you back your bowlers really well. I think it’s something that gets us in our zone, which is really good. For a team to have a routine and get into that zone is something I love personally as well. If I’m bowling, and they start clapping and that atmosphere comes up, I really get that punch. And it’s the same with everyone."

First the clap, then the wicket. Here's how Saurashtra are going about their business vs Assam @Paytm #RanjiTrophyhttps://t.co/AW1vIvJP0d

South Africa was eventually all out for 210, 14 runs short of taking a lead in first innings, with Petersen's 166-ball 72 being the stand-out knock for the hosts.